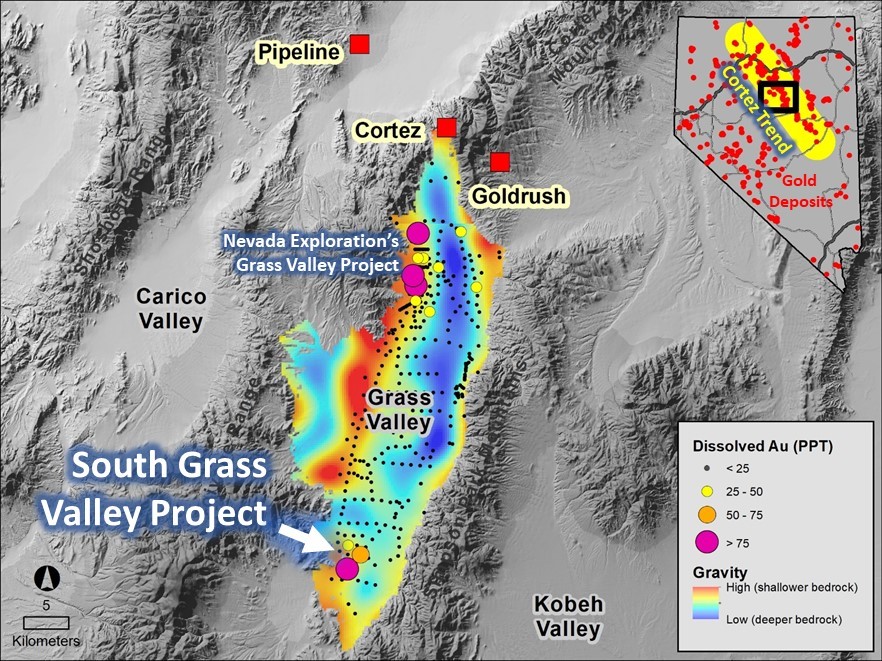 The South Grass Valley Project is located at the southern end of Grass Valley, the covered valley basin immediately south of Barrick Gold Corp.’s Cortez complex (Pipeline, Cortez Hills, and Goldrush), one of the world’s largest and lowest cost gold mines, with annual production of approximately one million ounces.

Two bedrock outcrops spaced 5 km apart at the Project exhibit CTGD-style alteration and geochemistry within a 700-metre-thick sequence of lower-plate carbonate host rocks immediately below the Roberts Mountains Thrust.  The permeability of the carbonate and brecciated units confirms that they are well suited to support CTGD-style mineralization, and the size of the alteration footprint seen in the two outcrops is large and consistent in scale with those surrounding major nearby mineral systems at Cortez Hills and Goldrush.

Based on the gravity and air magnetic geophysics datasets, the favourable host rocks project under relatively shallow cover across a large portion of the Project.  Range-front mapping combined with gravity geophysics suggests that this large area of favourable geology is intersected by a major, reactivated, high-angle fault corridor that projects under the cover from the exposed range front to the south, representing a significant potential conduit to expose the known favourable host rocks to mineralized hydrothermal fluids.

Following up on the gold-in-groundwater anomaly identified during its regional-scale, generative exploration program, Nevada Exploration has completed a detailed infill groundwater sampling program at South Grass Valley using purpose-drilled boreholes.  The objectives of the program were to establish: (1) the extent, size, and magnitude of the gold-in-groundwater footprint at the Project; (2) its relationship to the larger prospective geologic setting; and (3) support for a deeper follow-up drilling program.

The results of the infill borehole program defined a focused, 1,000 x 4,000 metre, N-S oriented zone of enriched gold, arsenic, antimony, barium, thallium, tungsten, and sulfate in groundwater, representing a hydrogeochemistry footprint consistent in size and magnitude (with gold up to 800 times background) as those seen around Lone Tree and Twin Creeks, large known CTGDs at the northern end of the Cortez Trend.  Importantly, this zone of enrichment is coincident with the projected intersection of the major high-angle fault corridor and the favourable lower plate carbonate host rocks known to exist at the Project. 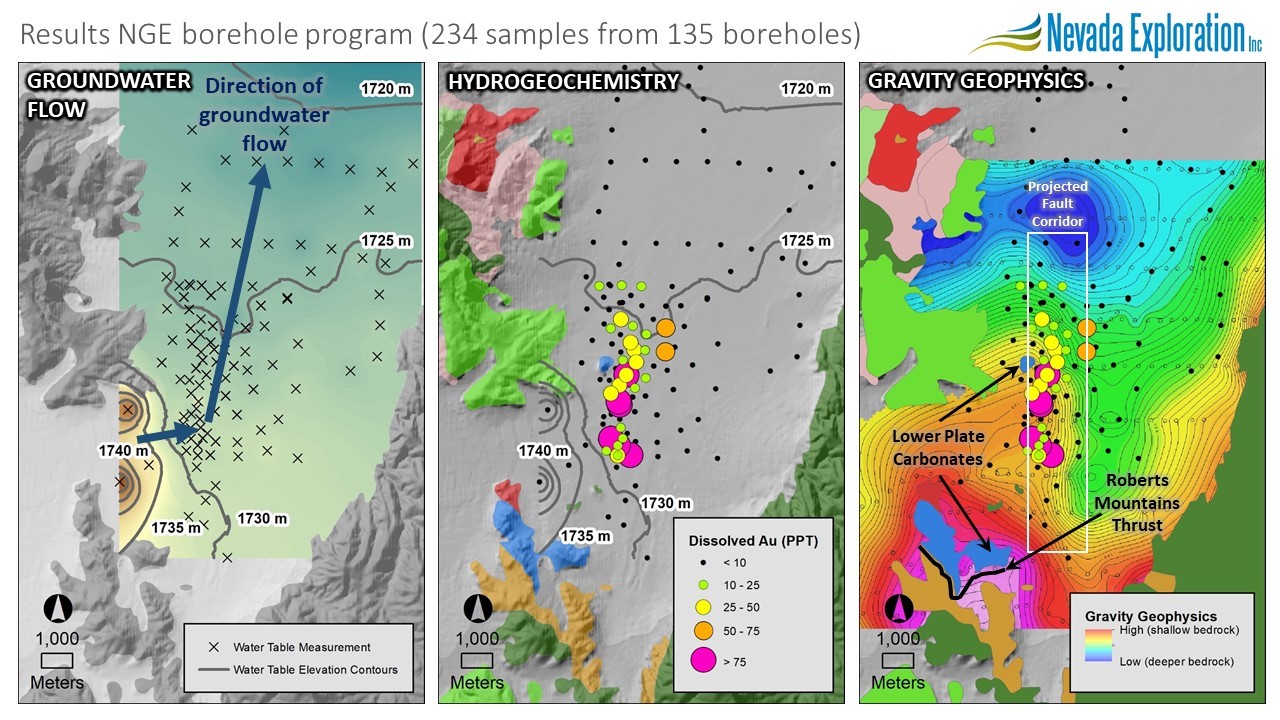 To build confidence on the extent of the projections of the thick sections of lower plate, containing CTGD-style alteration and geochemistry, under cover from where they are exposed in outcrop, Nevada Exploration commissioned a 991 line-km fixed-wing airborne magnetic survey across the Project, covering 124 sq. km.

At the regional scale, the results of the survey showed a pronounced NW-SE fabric, consistent with the strike of the fold axes known to control mineralization elsewhere along the Cortez Trend, including at Barrick’s Goldrush deposit.  At the project scale, the magnetic response across the exposed bedrock areas showed a strong correlation with mapped units, specifically with the higher-magnetic intrusive and volcanic units, and the lower-magnetic carbonate units, which provided confidence in the interpretation of the survey across the covered bedrock areas.

Based on the projections of the exposed geology and the survey results, the combined interpretation has resolved the covered portion of the Project into separate geologic domains.  Most significantly, the survey defined a 15 sq. km magnetic low extending under cover from one of the exposed bedrock outcrops containing a thick sequence of lower-plate carbonate host rocks, which Nevada Exploration believes corroborate the projection of these favourable host rocks beneath the Project.

The results of the air magnetic survey provide strong support for the CTGD target at the Project, defined by a focused zone of enriched gold in groundwater coincident with the projected intersection of favourable lower-plate carbonate host rocks and a major high-angle fault corridor.  Based on the size of target, the Company believes it is both large enough to support a district-scale mineral system, as well as now suitably constrained for a focused deeper drilling program to evaluate the potential for economic mineralization.

Nevada Exploration expects the next phase of work at South Grass Valley will consist of deeper drilling to test these now focused areas for places where gold-bearing hydrothermal fluids were able to exploit favourable structural and permeability conditions to impregnate favourable iron-rich carbonate host rocks (all of which are now known to exist) at the scale required to source a large CTGD. 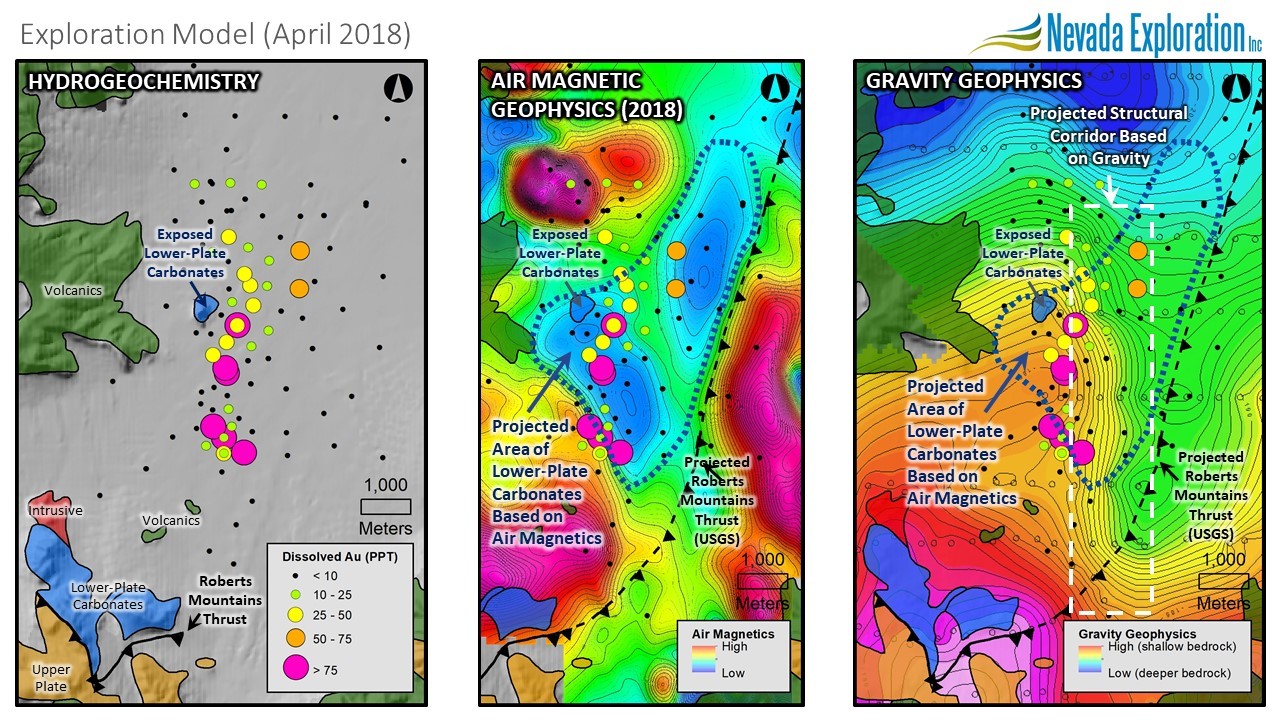