Nevada Exploration’s Kelly Creek Project is located along the Battle Mountain-Eureka Trend within the prolific Kelly Creek Basin, between multi-million-ounce Carlin-type gold deposits (CTGDs) at both the north and south ends of the Basin.  The Project was generated as a result of Nevada Exploration’s systematic, hydrogeochemistry-supported, regional exploration program, which discovered highly-enriched gold in groundwater over shallow bedrock at the Project.

The Company has completed a comprehensive geophysics program at the Project, the results of which project important structures and host units, known to control the mineralization at Lone Tree and Marigold to the south, northwards beneath the covered Project.  Based on these projections, Nevada Exploration has completed Scorpion and other drill sampling programs to characterize the geochemistry of the groundwater, alluvial cover, and bedrock at the Project, which together suggest the presence of a large and mineralized hydrothermal system.

The combined exploration datasets have established that all of the critical components associated with large CTGDs are present at the Project, including: favourable structural setting, favourable host rocks, suitable wall-rock permeability, characteristic geochemistry, and significant volumes of altered and mineralized bedrock.  With these datasets, Nevada Exploration has defined several mineralized targets similar in scale and ore-controlling features to the nearby Lone Tree (4.6 Moz) and Marigold (8.2 Moz) deposits.  Based on the Company’s geologic model, Nevada Exploration believes that the gold-bearing hydrothermal system that was active at Kelly Creek was likely the extension of the system responsible for Lone Tree and Marigold, with potential to support significant additional mineralization. 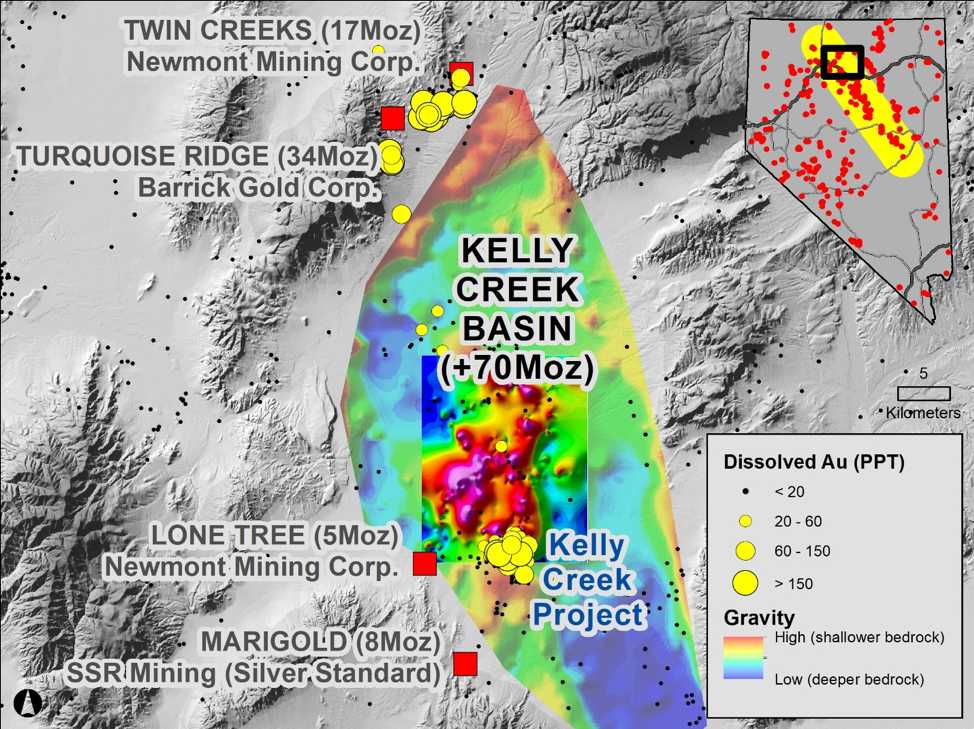 The Kelly Creek Project is located approximately 40 kilometres north-northwest of Battle Mountain in Humboldt County, Nevada, in the larger Kelly Creek Basin, which hosts more than 70 million ounces of gold in the ranges along its periphery at Twin Creeks, Getchell, Turquoise Ridge, and Pinson at its north end, and Lone Tree, Marigold, Trenton Canyon, Converse, Buffalo Valley, Copper Basin, and Phoenix at its south end.  Despite its proximity to many large CTGDs, the interior of the Kelly Creek Basin has seen limited systematic exploration activity to date because its bedrock is largely hidden by sand and gravel cover.

Based on the results of an integrated geophysics program, including gravity, air magnetics, seismic, and CSAMT, Nevada Exploration believes that the favourable geology (host units and structural controls) associated with the adjacent Lone Tree and Marigold deposits project northwards to the Kelly Creek Project area, under relatively shallow cover.  Early wide-spaced drilling and groundwater sampling helped to validate these projections and confirm that this relatively shallow, prospective structural and bedrock setting was also associated with enriched gold and supporting CTGD-style trace-element geochemistry in groundwater, alluvium, and bedrock.

With confirmation of a favourable geologic setting with characteristic CTGD-style geochemistry over a large area, Nevada Exploration completed a Scorpion drilling program to collect 3D groundwater, alluvium, and top of bedrock samples with the objective of vectoring into discrete gold-in-bedrock footprints (halos) at a scale consistent with those surrounding large CTGDs (for more information on the Company’s Scorpion drill rig see Advancing Covered Projects).  The Company’s 2016/2017 Scorpion program consisted of 61 holes totalling 5,864 metres, with an average hole depth of 95 metres.  Of the 61 holes, 41 holes encountered bedrock, at an average depth of 84 metres, which allowed for widespread bedrock mapping and sampling.  From the 61 holes, 552 water samples were collected, on average every 10 metres downhole, which provided important 3D geochemistry across the project, especially in areas of deeper bedrock where the Scorpion could not sample bedrock directly. 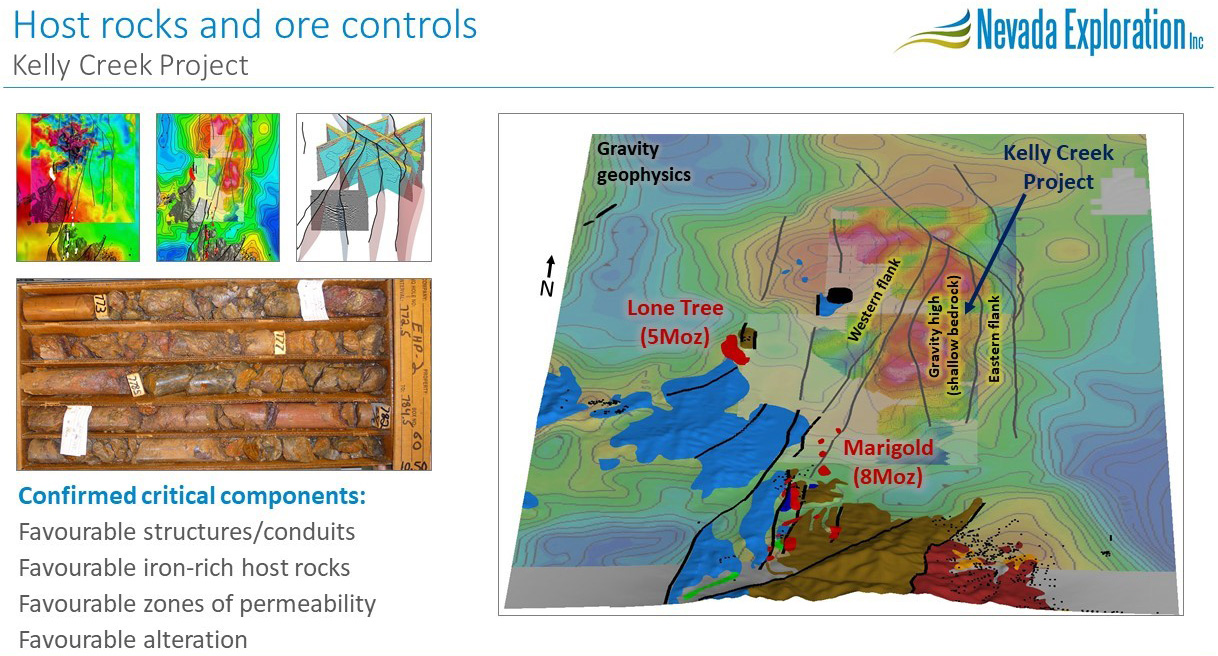 The results of Nevada Exploration’s Scorpion sampling program have established that the lateral extent of the gold-in-groundwater footprint at Kelly Creek is of a comparable size to that seen at Lone Tree, consistent with the presence of a large, robust, mineralized system.  Zones of enriched gold in groundwater form focused, parallel NNW-trending lineaments (also reflected more broadly in arsenic and antimony in groundwater) bounded by the primary structural fabric that runs parallel to Lone Tree and north from Marigold.  These linear zones of enrichment that cut through this large favourable system are consistent with the geometry of mineralization hosted within secondary zones of structural extension (Riedel-style shears), marking potential conduits of enhanced vertical hydrothermal fluid flow that are known to provide important ore-controls at many large CTGDs in Nevada (including Lone Tree).

The combined results of the Scorpion sampling program and the earlier drilling have confirmed that the hydrothermal system at Kelly Creek was gold-bearing over a large area, with discrete zones of enriched gold in groundwater anchored to at least two clusters of >0.1 g/t gold in bedrock samples, covering areas at least 700 x 300 metres and 1,000 x 600 metres respectively, together defining geochemical footprints consistent in size with those seen at nearby Lone Tree and Marigold. 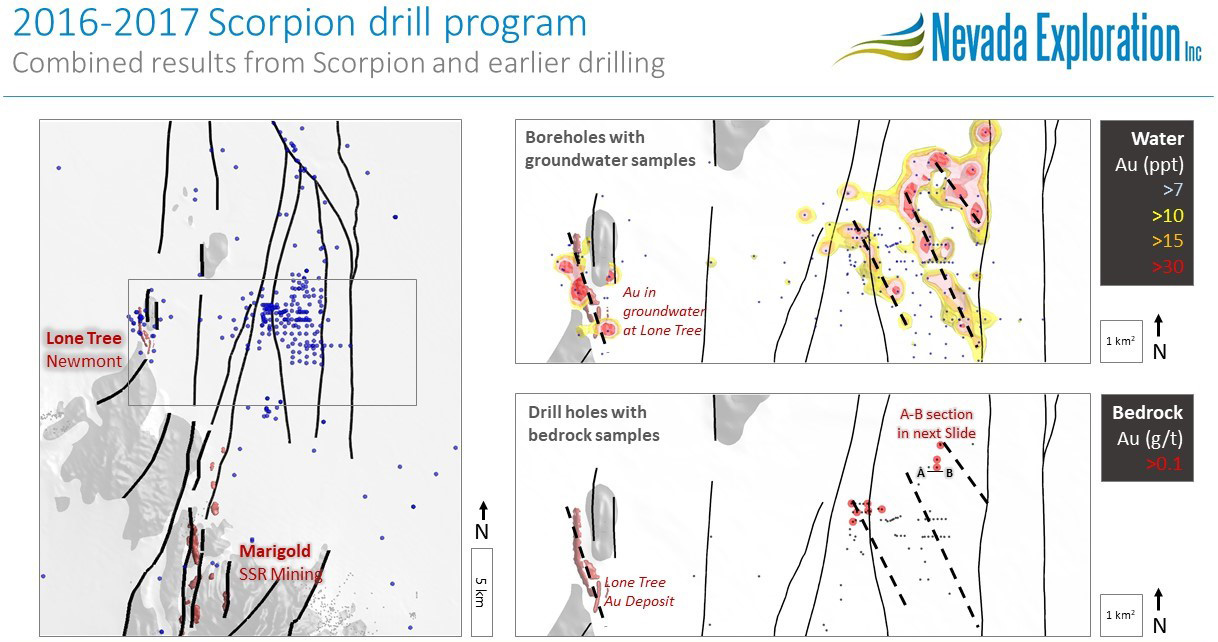 Nevada Exploration has integrated the latest Scorpion drill results with those of earlier deeper core drilling and the geophysics structural interpretation to update the geologic model at Kelly Creek specifically to test for both the presence and scale of the critical components known to support gold mineralization at 5 - 10 million-ounce CTGDs in this part of Nevada.  Based on the combined exploration datasets, the Company believes that:

Nevada Exploration believes that these results confirm that all the critical components needed to host a large 5 - 10 million-ounce CTGD are present at the Kelly Creek Project, and each at the required scale.  Furthermore, the Company believes the results suggest that the gold-bearing hydrothermal system at Kelly Creek is likely the extension of the system responsible for the Lone Tree and Marigold deposits. 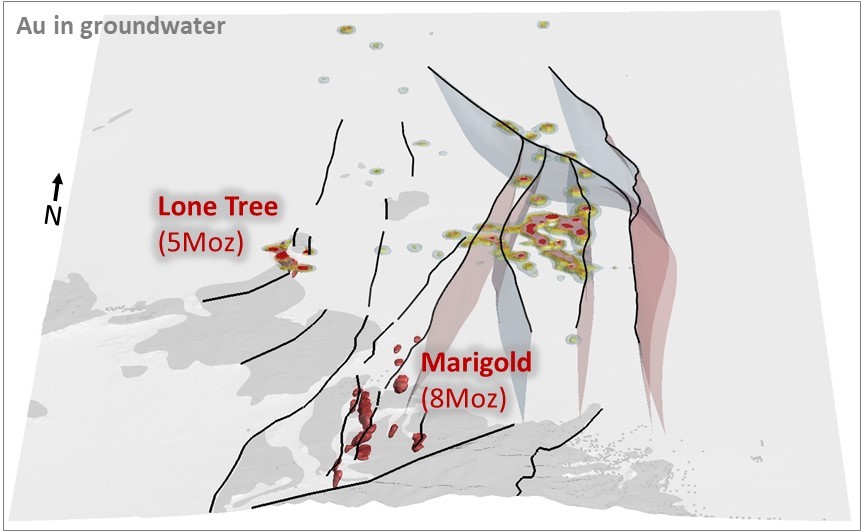 Nevada Exploration believes the work to date at its Kelly Creek Project has established that the hydrothermal system at Kelly Creek has the potential to support significant mineralization.  Importantly, the results have also clearly focused the next stage of work at the Project on discrete lineaments of enriched gold in groundwater that cut through the larger favourable geologic setting, which provide an important new crosshair to advance this district-scale project.  Nevada Exploration expects the next phase of work at Kelly Creek will consist of deeper drilling to test these now focused areas for places where gold-bearing hydrothermal fluids were able to exploit favourable structural and permeability conditions to impregnate favourable iron-rich host rocks (all of which are now known to exist) at the scale required to source a large CTGD.