THE GOLDEN OPPORTUNITY IN NEVADA

Nevada produces more gold per area than any other jurisdiction, and is home to some of the world’s largest and most profitable mines, including the Goldstrike (Carlin) and Cortez complexes, which each produce approximately one million ounces per year.  To put this into perspective, relatively-small Nevada produced 5.4 million ounces of gold in 2016, about equal to the annual production of each of Canada and South Africa. 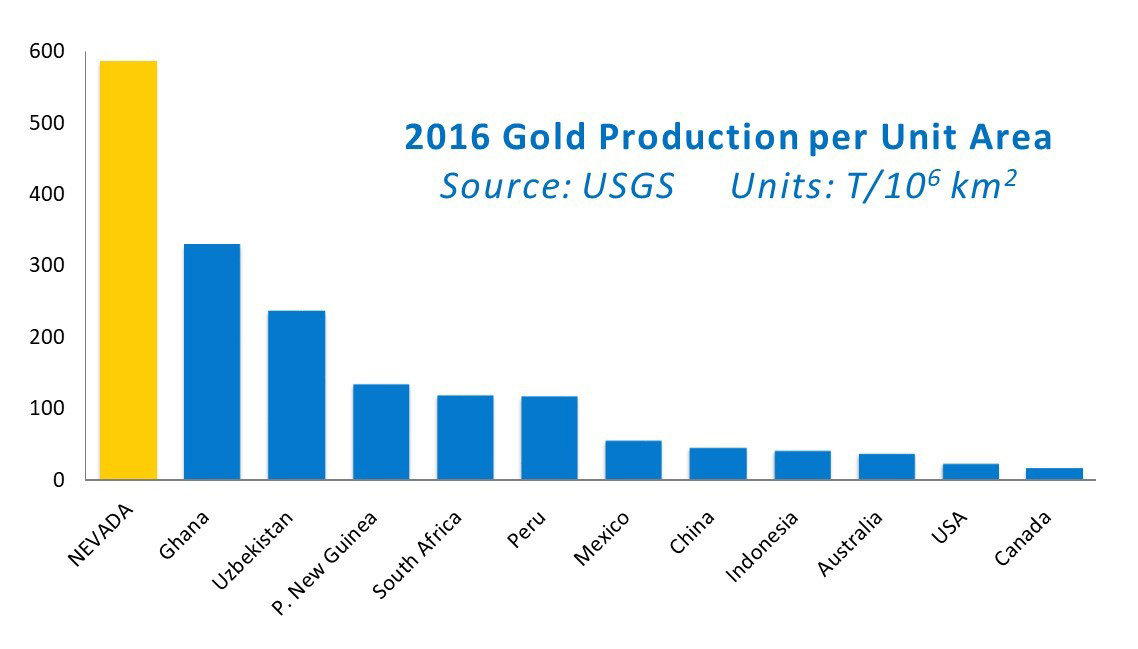 From 1859 to 2016, Nevada’s mines have produced more than 225 million ounces of gold.  The vast majority of this production has come since 1965, which marked the start of production at the Carlin gold mine, where explorers and miners first recognized the opportunity to discover large, micron (“no-see-um”) gold deposits in the State.  Today, these types of deposits are known as Carlin-type gold deposits (CTGDs).  They have been discovered across north-central Nevada, most famously along the Carlin and the Battle Mountain-Eureka (Cortez) Trends – each of which have produced more than 100 Moz each, and together contain some of the world’s largest producing operations, such as the Goldstrike (Carlin) and Cortez complexes.  For more background on CTGDs see inset at bottom of page.

As is common when opening up new search spaces, opening up Nevada for CTGDs resulted in a steep rise in Nevada’s annual gold production; however, as the search space has matured over the subsequent decades, its annual production increases began to slow, ultimately peaking at 9 Moz in 1998, and then reversing, falling to 5.4 Moz by 2016. 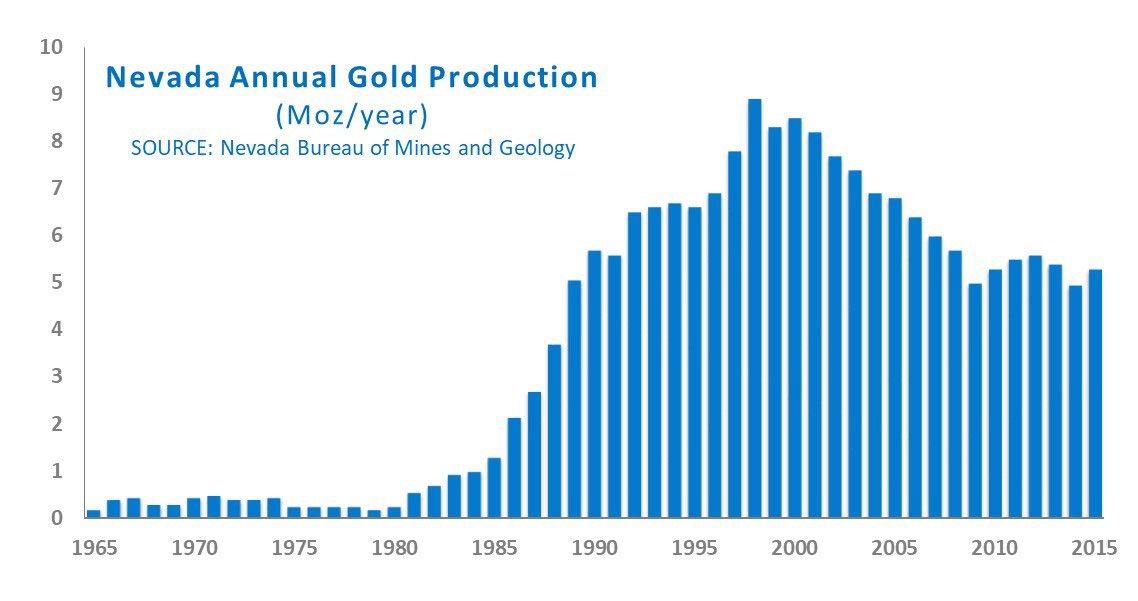 Nevada’s annual gold production curve shows the classic hallmarks of a mature jurisdiction where continued exploration in a now well-explored search space is resulting in fewer and fewer new mines coming on line.  Rather than accept the diminishing returns of a mature search space, explorers looking to find Nevada’s next CTGDs must focus on the parts of the State that have not yet been effectively explored.

Long after the major depositional events responsible for Nevada’s large CTGDs, Nevada’s already complex geology was broken up into an alternating series of mountain ranges and valley basins, which left approximately 45% of the State’s bedrock exposed and visible in its mountains, and approximately 55% of Nevada’s bedrock hidden beneath its now covered basin valleys.  Because Nevada’s major gold deposits were formed well before the major faulting that shaped Nevada’s present-day basins and ranges (mountains and valleys), the distribution of Nevada’s gold deposits is effectively independent of and thus unrelated to the distribution of what are now covered versus exposed terranes (basins vs. ranges). 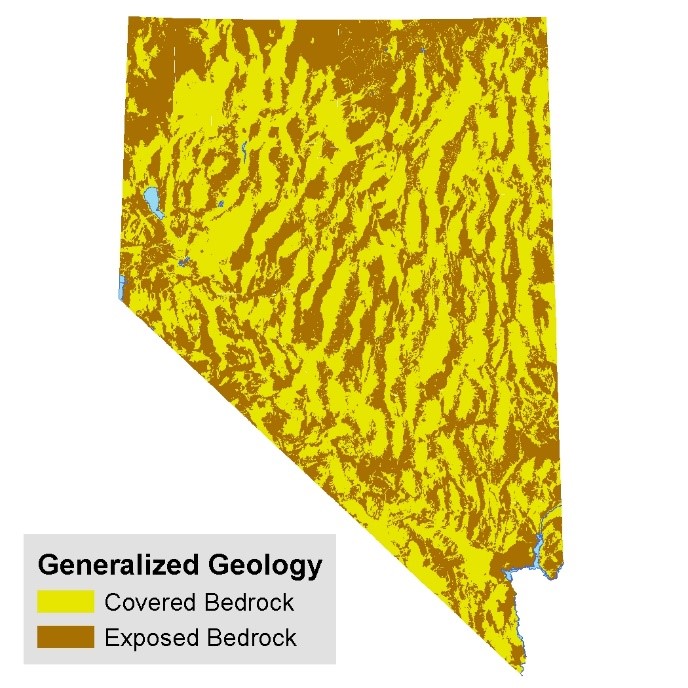 Most geologists agree that Nevada’s covered terranes should contain at least as much gold as contained in its exposed terranes; however, because conventional exploration tools used in exposed terranes are poorly suited to exploring in covered terranes, the approximately 55% of Nevada represented by covered terranes remains largely underexplored.  In other words, because of the higher risks and costs of exploring in covered settings due to the limitations of conventional exploration technology, more than half of the gold endowment in Nevada (the world’s largest gold producer by area) is potentially still waiting to be discovered beneath its covered valley basins.

Nevada’s covered terranes present an important new search space for CTGDs, and represent an exciting opportunity for explorers to once again participate in the large discoveries made during the early part of the creaming curve (see New search spaces provide the greatest returns).  The next round of gold discoveries in Nevada will come from explorers able to develop new methods that can quickly, accurately, and inexpensively evaluate large areas and vector toward gold mineralization in covered bedrock settings, similar to how the introduction of new fracking technologies has opened up entirely new, previously-ignored, search spaces that now generate significant production, which have radically changed the dynamics of the industry.

“There is no reason not to assume as much gold still exists as has been mined in the past, but prospectors, explorationists, and geologists have found the easy gold.”
Dr. Richard Goldfarb, Ph.D., United States Geologic Survey

Nevada’s unique gold endowment is the product of a specific combination of geologic processes that came together at a single place and time, which cannot easily be reduced to simple “trends”, despite the common use of the term.  This combination of processes began 385 million years ago (Ma) when an ocean covered what is now Nevada.  At the bottom of this ocean, different materials accumulated to form the layer cake of rock units important for the later creation of these particular types of gold deposits.  Over time, complex and powerful plate tectonic processes pushed from the west to the east, forcing layers of bedrock to be driven together, resulting in some layers being pushed on top and some layers being pushed below, creating an alternating series of what are now known as “Upper Plate” and “Lower Plate” rocks.

One of the most important aspect's of the resulting shuffled layer cake is that the Upper Plate predominantly contains sand, silt, and clay rocks, which are generally less permeable, while the Lower Plate predominantly contains limestone rocks, which are generally porous, reactive, and easily dissolved.  Continued tectonic movement of these plates saw the Upper Plate being pushed over the Lower Plate, much like a carpet being pushed over a wood floor, slipping and folding to create a variety of traps for the rising hot hydrothermal fluids that followed later, similar to the structural traps that control the migration and formation of oil and gas reservoirs.

At the same time that the near surface rock layers were being compressed by plate tectonic forces, a deeper slab of oceanic crust containing unusually high concentrations of gold and other minerals was being pushed eastward and downward beneath Nevada.  These forces periodically pushed this slap deeper toward the earth’s mantle, and with each push down, the lower edge of the slab melted, releasing a charge of gold and other minerals into the surrounding hydrothermal fluids.  Under extreme pressure, these hydrothermal fluids, now periodically impregnated with elevated concentrations of gold and other minerals, were pushed up along major vertical fault zones toward the surface.  These fluids passed easily through the more porous, reactive, and easily dissolved Lower Plate rocks, but when they reached the impermeable Upper Plate rocks, the fluids (and the minerals and heat energy that they contained) could not go any further.

With time, the combination of hydrothermal fluids, impregnated with unusually high concentrations of gold, rising up along structures and interacting with porous and reactive Lower Plate rocks, together contained (capped) by the impermeable Upper Plate rocks, created a perfect pressure cooker-type environment that allowed the gold in the hydrothermal fluids to concentrate in the sponge-like Lower Plate rocks to form the CTGDs that Nevada is known for.  While taken on their own, these components represent a common geologic phenomenon seen around the world, it is the unique coincidence of all of these critical components that resulted in the formation of Nevada’s significant concentration of large, multi-million-ounce CTGDs.