Nevada Exploration Inc. (“NGE” or the “Company”) (TSX-V: NGE; OTCQX: NVDEF) is very pleased to announce that it has completed 36 Scorpion drill holes totalling more than 2,600 metres (8,600 feet) at its Kelly Creek Project located along the Battle Mountain-Eureka Trend in north-central Nevada, and that the preliminary results indicate that vectoring using gold and related geochemistry in the groundwater at the Project is leading to increasing gold and related geochemistry in the bedrock and alluvium.

Further to the Company’s news release dated February 6, 2017, NGE is using its Scorpion Drill Rig to evaluate several mineralized, structurally controlled, shallow bedrock targets extending north under cover from Silver Standard’s Marigold Mine.  The objective of this stage of NGE’s exploration program is to map the gold and related geochemistry found in the bedrock, alluvial cover, and groundwater at these targets, and to vector towards one or more mineralized footprints large enough to be associated with a major gold deposit.

With its Scorpion Drill Rig, NGE is focusing on completing fences of holes across its main targets at the Project to sample the bedrock, alluvial cover, and groundwater.  NGE has now completed fences across the first two targets and a portion of a third.  The locations of these Scorpion drill holes are shown on the attached map.  The Scorpion drill holes range in depth from 23 to 120 metres (75 to 400 feet), with an average depth of 73 metres (240 feet). 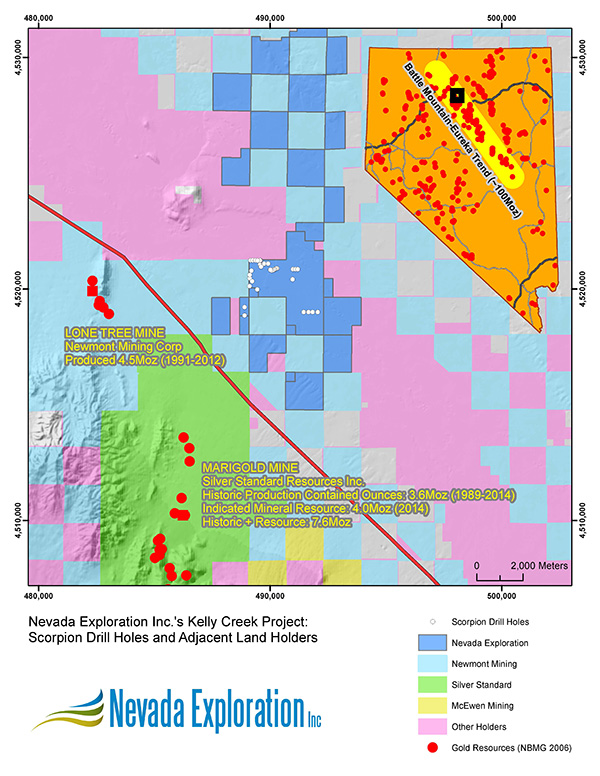 While NGE is waiting for assays from a majority of the drill holes, the initial results show significant and increasing concentrations of gold and related trace-elements in the bedrock (up to 0.15 ppm Au), in the alluvial cover above the bedrock (up to 0.10 ppm Au), and in the groundwater (up to 890 ppt Au).  Also of significance, the drilling continues to define areas of very shallow bedrock, as shallow as 20 metres (70 feet), which is considerably shallower than previously believed.  NGE expects to provide a detailed update with full results once it has completed the next drill shift, scheduled to end in early May, and received all assays.

Discussing the results, NGE’s CEO, Wade Hodges: “We’re very excited to share the news that the early results of our Scorpion drilling program at Kelly Creek confirm that we are focusing in on a number of shallow bedrock targets by following increasing concentrations of gold in all three of: the bedrock, the alluvial cover, and the groundwater.  This is exactly what we designed this phase of the program to accomplish.  We are exploring in the middle of the Kelly Creek Basin, one of the most mineralized valleys in the heart of the world’s highest gold producing jurisdiction by area.  With our comprehensive and systematic under-cover toolbox, which includes our Scorpion Drill Rig, we are vectoring into the caliber of high-quality exploration targets that the industry is in desperate need of, and doing so more than 5 kilometres (3 miles) from the nearest outcrop.  Our ongoing work at Kelly Creek provides a terrific example of the power of our integrated exploration program to lead the industry to open up the under-cover search space in Nevada.”

Additionally, based on the positive results of the Scorpion drilling program at the Kelly Creek Project, the Company is also pleased to report that it has increased its land holdings at the Project by adding an additional approximately 5 km2 (2 mi2) of private land to its Hot Pot Lease Agreement.  With this additional land, NGE now controls a combined total of 42 km2 (16 mi2) of both private and BLM mineral rights in the Kelly Creek Basin.

About the Kelly Creek Project

The Kelly Creek Basin is located along the Battle Mountain-Eureka Trend, and is bounded by multi-million-ounce gold deposits to the north (Twin Creeks, Getchell, Turquoise Ridge, and Pinson) and south (Lone Tree, Marigold, Trenton Canyon, Converse, Buffalo Valley, Copper Basin, and Phoenix) - together representing more than 70 million ounces of gold along the periphery of the Basin.  Despite its close proximity to dense, world-class mineralization, the interior of the Kelly Creek Basin has seen limited systematic exploration activity to date because its bedrock is largely hidden by sand and gravel cover.

NGE has integrated the use of its proprietary hydrogeochemistry technology with conventional exploration methods to evaluate the larger Kelly Creek Basin, and has acquired 42 km2 (16 mi2) of mineral rights covering what NGE considers to be a highly prospective area in the middle of the Basin along a portion of a structurally-controlled, shallow, covered bedrock high coincident with highly anomalous gold and associated trace-element chemistry in groundwater.

NGE has advanced the Project by completing detailed groundwater sampling, seismic geophysics, gravity geophysics, conventional orientation drilling, and now Scorpion drilling.  NGE believes that the results to date at Kelly Creek have focused the area down to several mineralized deposit-footprint-sized target areas, each similar in scale and ore-controlling features to the nearby Lone Tree and Marigold deposits, within a larger gold-bearing hydrothermal system along a series of steeply dipping fault zones containing several horst and graben features identified by clear geologic offsets.

NGE is now evaluating these target areas using its Scorpion Drill Rig with the specific objective of collecting samples of the bedrock, alluvium, and groundwater to vector towards mineralized footprints large enough to be associated with a major gold deposit, which will then be advanced with deeper conventional drilling.

NGE is an exploration company focused on gold in Nevada.  NGE is led by an experienced management team that has been involved with the discovery of more than 30 million ounces of gold in Nevada.

NGE’s team has spent the last decade integrating the use of hydrogeochemistry (groundwater chemistry) with conventional exploration tools to develop a Nevada-specific regional-scale geochemistry exploration program.  With innovative technology, NGE has completed the world’s largest groundwater sampling program for gold exploration, collecting more than 5,000 samples, to evaluate Nevada’s covered basins for new gold exploration targets.  To advance follow-up targets, NGE has overcome the high drilling costs that have previously prohibited the wide-spread use of drilling as a prospecting tool by developing its Scorpion Drill Rig, Nevada’s first truck-mounted small-diameter RC drill rig specifically tailored to the drilling conditions in Nevada’s basins (analogous to RAB drilling in other parts of the world).

By integrating hydrogeochemistry and early-stage low-cost drilling with conventional exploration methods, NGE is generating and advancing a significant portfolio of gold exploration projects in Nevada.  NGE and its exploration partners have now drilled more than 18,000 metres on targets defined by its exploration program, and at several projects have discovered new large hydrothermal systems, with spatial extents covering several square kilometres, defined by system-appropriate alteration in bedrock over significant drill intervals (>100 feet) containing widespread low-level gold (>100 ppb) and supporting trace-element lithogeochemistry consistent with the geologic and geochemical footprints of Nevada’s large gold deposits.  These are the types of footprints that are associated with multi-million-ounce gold deposits in Nevada, and with these results NGE believes that it has demonstrated the validity of its integrated exploration program to discover and advance new high-quality gold targets in otherwise blind settings.

By overcoming the challenges and radically reducing the costs of exploring in Nevada’s covered basins, NGE is taking meaningful steps to open this important new search space up for district-scale exploration.  NGE’s business model is to create shareholder value by leveraging its properties and technology through generative exploration, joint ventures, and other exploration partnerships.