The Grass Valley Project is located along the western edge of Grass Valley, the valley basin that continues south from Barrick Gold Corp.’s Cortez complex (Pipeline, Cortez Hills, and Goldrush), one of the world’s largest and lowest cost gold mines, with annual production of approximately one million ounces.  Nevada Exploration generated its Grass Valley Project based on elevated concentrations of gold and Carlin-type gold deposit (CTGD) style trace-element geochemistry identified in groundwater as part of its basin-scale, generative, hydrogeochemistry-supported exploration program across the larger Grass Valley. 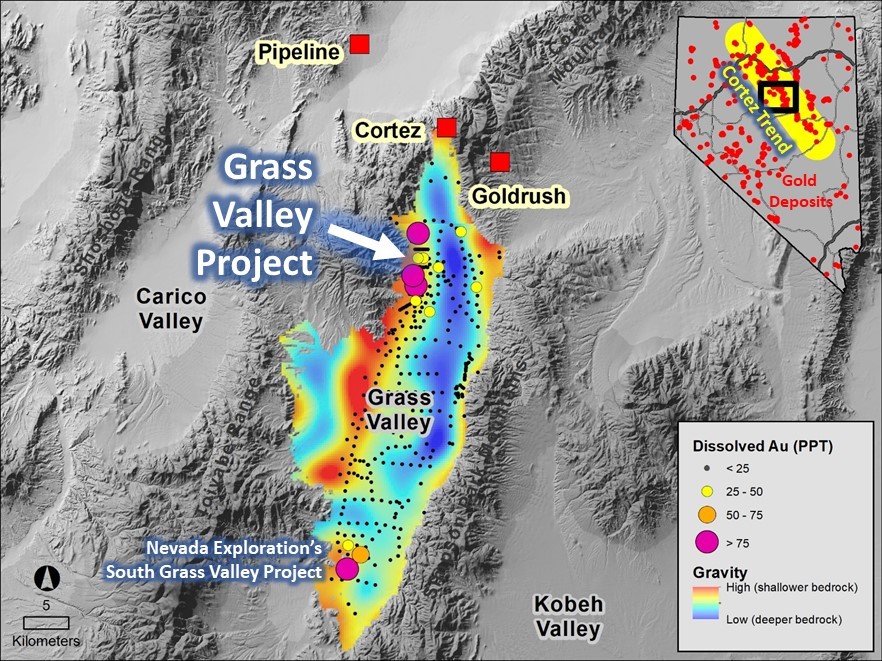 Following up from the results of its basin-scale program, Nevada Exploration completed a detailed, infill groundwater sampling program using purpose-drilled boreholes to establish the extent of the enriched gold and supporting trace-element hydrogeochemistry at the Project.  Together in part with a former early partner at the Project (the Company now owns the Project 100%), the Company has advanced the project with follow-up work programs, including: vegetation and soil geochemistry (including soil gas mercury); the acquisition and reprocessing of two historic seismic geophysics lines; geologic mapping; a gravity geophysics survey; one stratigraphic orientation drill hole; and the geochemical analysis of approximately 2,400 metres of drill cuttings obtained from seven historic (2005 to 2008) geothermal exploration drill holes.

Based on the results of the work to date, the Company believes it has established support for the presence of a large, gold-bearing hydrothermal system at the Grass Valley Project associated with a complex structural setting coincident with the enriched gold and trace-element seen in the groundwater sampling.  Nevada Exploration believes the resulting exploration model suggests the presence of the critical components need to host large CTGDs.

The Grass Valley Project is located in an inferred deep-seated structural corridor that heads south-southwest from the Cortez complex, a series of large CTGDs primarily hosted in deeper lower-plate bedrock.  Four miles to the west of the Project, windows through the upper-plate bedrock have exposed lower-plate bedrock that hosts a small CTGD at the Toiyabe mine.  Several of the SSE trending folds exposed in the mountains surrounding the Toiyabe mine project beneath the Grass Valley Project area, where they intersect the major inferred NNE structural zones that project south from the Cortez complex.  Mapping and sampling of the exposed range-front geology along the west side of Grass Valley identified upper-plate bedrock units with widely-scattered, small areas of hydrothermal alteration coincident with anomalous gold and trace elements.  The local and district-scale mapping suggest the possibility that the lower-plate rocks associated with mineralization at Cortez to the north and Toiyabe to the west could also be present within economic depths at the Grass Valley Project.

To establish the extent of the enriched gold and CTGD-style trace-element hydrogeochemistry at the Project, Nevada Exploration completed a detailed infill sampling program using purpose-drilled boreholes.  The results of the infill sampling program defined a N-S zone of enrichment coincident with the projection of a series of NW-SE structures that repeat northward towards Cortez.  With the objective of confirming the presence of gold and supporting trace-element geochemistry in sampling media in addition to groundwater, an early partner competed several rock, soil, and vegetation sampling programs across the Project, the results of which showed localized concentrations of elevated gold and trace element chemistry associated with the zone of enrichment seen in the groundwater, further suggesting the presence of possible mineralization at depth.

To improve upon the resolution of information provided by its regional-scale gravity geophysics dataset, Nevada Exploration completed a detailed gravity survey across the area of enriched hydrogeochemistry mapped by the infill borehole groundwater sampling program.  The detailed gravity geophysics results successfully outlined a broad area of relatively shallow and likely structurally-complex bedrock that extends approximately 3 kilometres out into the valley basin and runs for the entire 8 kilometre length of the target area.  In addition to providing more evidence that the depth of cover at the project is potentially shallow, this improved gravity data also demonstrates that the target area is big enough to support a large CTGD. 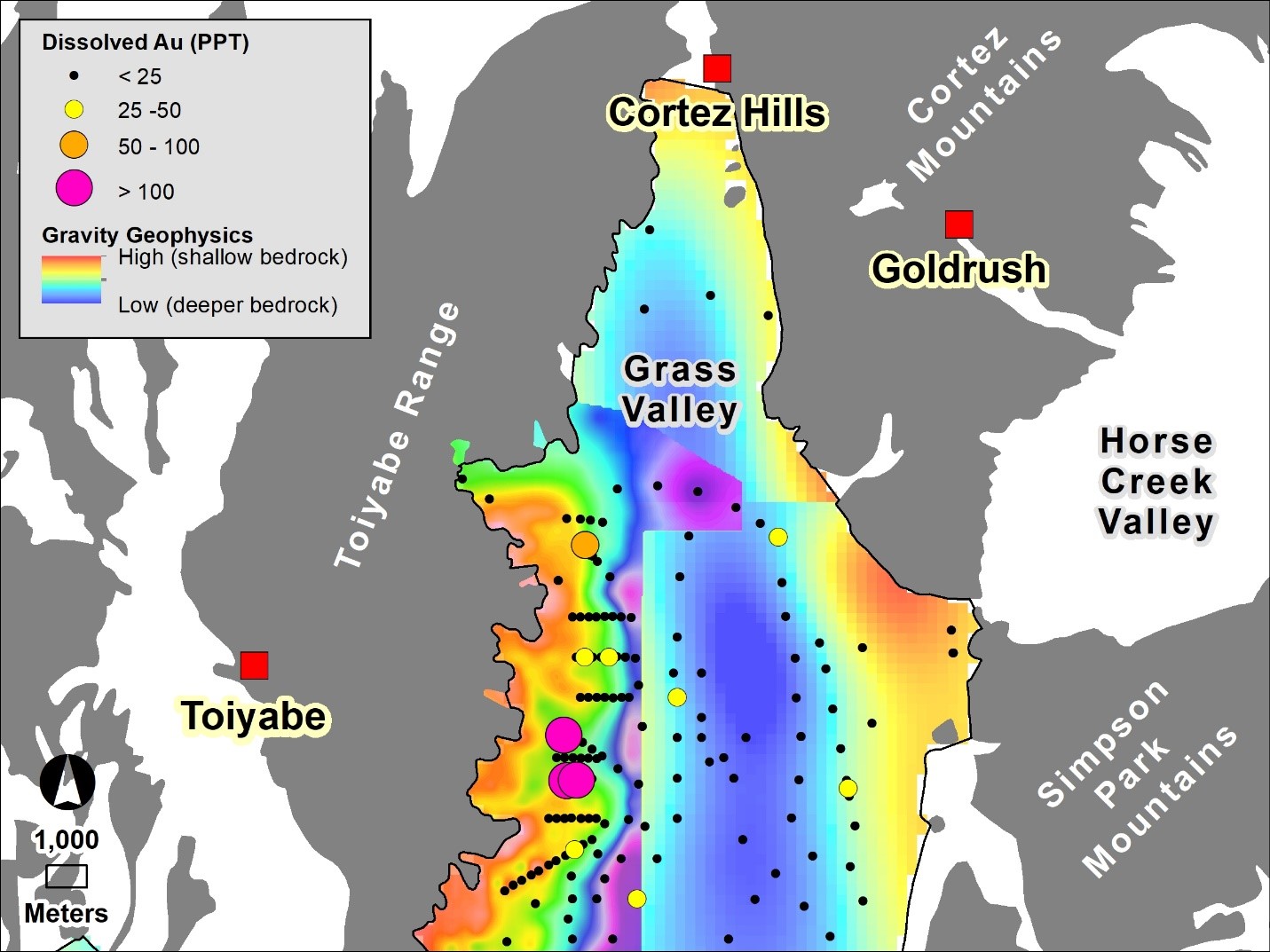 To compliment the gravity geophysics survey and further substantiate the interpretation of the results, Nevada Exploration acquired historical seismic geophysics data for two survey lines that cut through the Grass Valley Project.  The historical data was originally collected in the late 1980’s to characterize the deep crustal structure of north-central Nevada.  The Company reprocessed the raw data to enhance resolution at shallower depths more appropriate for gold exploration.  The reprocessed data identified a complex fault system dipping to the west that exhibits characteristics associated with older reactivated structures regarded as favorable for CTGDs elsewhere in the region.  Together, the gravity and seismic data suggest an underlying structural setting of major high-angle, potential fault conduits associated with a hydrothermal system of a size necessary to support the formation of a major mineral system.

To orient the exploration datasets and begin to understand the bedrock stratigraphy at the Project, a former exploration partner completed a deep stratigraphic orientation drill hole at the north end of the Project centred on a pronounced gravity low, thought to be potentially indicative of hydrothermally-altered lower-plate carbonates.  This 812 metre test hole encountered bedrock deeper than expected, at 207 metres, where it entered and eventually bottomed in upper-plate bedrock.  While the drill hole did not encounter lower-plate bedrock, the large vertical bedrock offset it defined relative to the range front demonstrates the significant structural complexity at the Project, both consistent with the interpretation of the gravity geophysics and characteristic of the geologic settings of CTGDs.

Following the completion of the orientation drill hole at the north end of the Grass Valley Project, Nevada Exploration acquired approximately 2,400 metres of drill cuttings and drill logs from a cluster of seven historic (2005 to 2008) geothermal exploration drill holes located at the southern end of the Project (the “geothermal holes”).  Obtaining these samples provided a valuable opportunity to analyze the bedrock geology in this area without incurring any drilling costs.  The assay results from the geothermal holes show significant intervals of enriched arsenic, antimony, and sulfur, which represent a trace-element package commonly associated with CTGDs.  Of the geothermal holes, hole TG3 encountered the most continuous interval of anomalous geochemistry from the top to the bottom of the hole at 297 metres, with gold concentrations ranging from 3 ppb to 45 ppb (AVG 12 ppb), arsenic concentrations ranging from 60 ppb to 636 ppb (AVG 289 ppb), antimony concentrations up to 85 ppb (AVG 38 ppb), and sulphur concentrations ranging from 2,150 ppm to 36,300 ppm (AVG 19,761 ppm).  Additionally, TG3 encountered significant intervals of silicified limestone and elevated concentrations of sulfur coincident with the visual identification of increased pyrite, which is likely arsenopyrite based on an associated increase in iron and arsenic.  The other geothermal drill holes showed narrower zones of elevated silver (up to 16.7 g/t), arsenic (up to 1,925 ppm), antimony (up to 86 ppm), and mercury (up to 1.1 ppm).

The work to date at the Project has established evidence that the complex structural controls associated with Cortez to the north are also present along the western edge of Grass Valley, coincident with potentially favorable host rocks and enriched concentrations of gold and supporting trace-element geochemistry in groundwater.  Based on the combined datasets, the Company believes that the Project exhibits the features and scale of a potentially gold-bearing hydrothermal system consistent with large CTGDs.

Nevada Exploration believes the Grass Valley Project is one of the most important new CTGD exploration projects in Nevada, offering significant upside in terms of scale, especially given its location and proximity to Cortez.  The Company’s exploration team continues to update its geologic model with ongoing field mapping activities and a 3D compilation and interpretation of its comprehensive exploration datasets.  The Company expects the next stage of work at the Project to be a shallow drilling program using its Scorpion drill rig to further characterize the geochemistry of the groundwater, alluvium, and bedrock along these inferred structural controls with the objective of constraining the target for a focused deeper drilling program.