Nevada Exploration Inc. (“NGE” or the “Company”) (TSX-V:NGE; OTCQB:NVDEF) is pleased to provide an update from its 2021 core drilling program at its South Grass Valley Carlin-Type gold project. 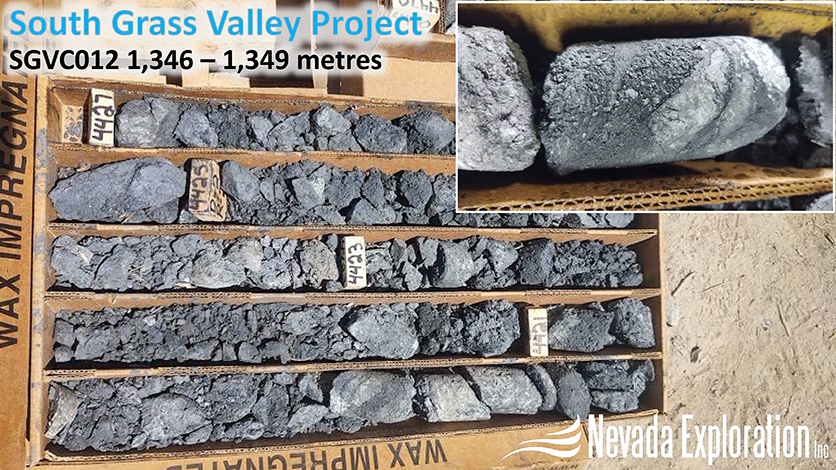 Discussing the ongoing program, NGE CEO, Wade Hodges: “It’s been an exciting couple months logging what is now the deepest hole on the project, and this first hole of 2021 has already significantly de-risked our target concept at East Golden Gorge.  All of our work to date had pointed to the Clm unit effectively providing the dominant fluid superhighway for the mineralizing Carlin-type fluids to move laterally through the district, and quite simply, our goal with this current drilling program is to test whether our eastward down-dip projection of this superhighway is correct, and whether it supported the type and volume of hydrothermal fluid flow necessary to support a globally significant new gold deposit.

“Drilling more than 1,000 metres to get down to our target in this part of the project took fortitude, especially through the middle part of the hole which had seen very little in the way of any hydrothermal fluid flow, but as predicted by our geologic model, once we approached our target zone, the rocks began to change.  From 1,150 metres onwards, the Clm unit contained some of the most intense Carlin-type alteration seen to date at the project, in many places reduced largely to a sulphidic paste, and based on our XRF analysis we can confirm that this massive zone of alteration contains characteristically high concentrations of Carlin-type pathfinders.  Given the irregular geometries of Carlin-type gold deposits we’re not betting on any single hole of this program, but with SGVC012 we most certainly hit our targeted superhighway, which represents a major step in validating our East Golden Gorge target concept.

“There is still more to learn from SGVC012 and we’re continuing to collect additional structural data; and while we integrate this data at the north end of the project, for our next hole, SGVC013, we’ve moved the rig to the south end to complete a similarly deep hole to test our targeted Clm unit where this favourable geologic setting and the Water Canyon structural corridor are squeezed along the margin of the Grass Valley Stock.

“In terms of our overall progress with the program so far, we are pleased to have been able to complete our first hole to its target depth through some typically challenging and deep Carlin-type drilling conditions, though securing the continuity of experienced personnel has presented some challenges on this second hole.  The rig is currently on a break while our contractor assembles additional personnel.  We had been running three crews, such that the rig was drilling continuously, but once drilling resumes we expect we may need to switch to a schedule that includes days off, which is the schedule many of the rigs in the state are employing.  To help ensure we maintain momentum at this important stage of the project we’ve begun the process of contracting a second drill rig, as well as strengthened our Nevada-based logging team with the addition of a new exploration geologist.”

With respect to the new information provided by SGVC012, NGE reports: 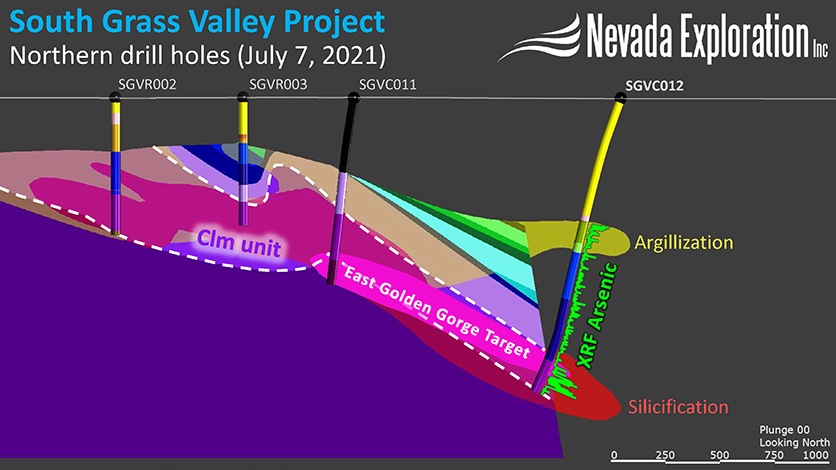 For the second hole of the program (SGVC013), NGE moved the drill rig 3,500 metres to the south of SGVC012, to set up at the eastern end of the Company’s southern E-W fence of drill holes.  This is an important area of the project, where the favourable lower-plate bedrock units are compressed between the Grass Valley Stock and the Water Canyon structural corridor, a setting that is well-suited to creating the conditions that promote increased Carlin-type hydrothermal fluid flow, as well as an area that is coincident with the highest gold-in-groundwater anomaly in the gravels above the bedrock.  Just as at the north end of the project, here at the southern end the intensity of Carlin-type alteration features and highly-anomalous concentrations of Carlin-type pathfinders seen in NGE’s earlier drilling increased markedly towards the east, and NGE’s objective with SGVC013 is to intersect the southern projection of its East Golden Gorge target where the Clm unit dips eastward towards the Water Canyon structural corridor.  With a planned depth of 1,450 metres, SGVC013 is expected to collect samples much deeper than the earlier drill holes on this southern fence. 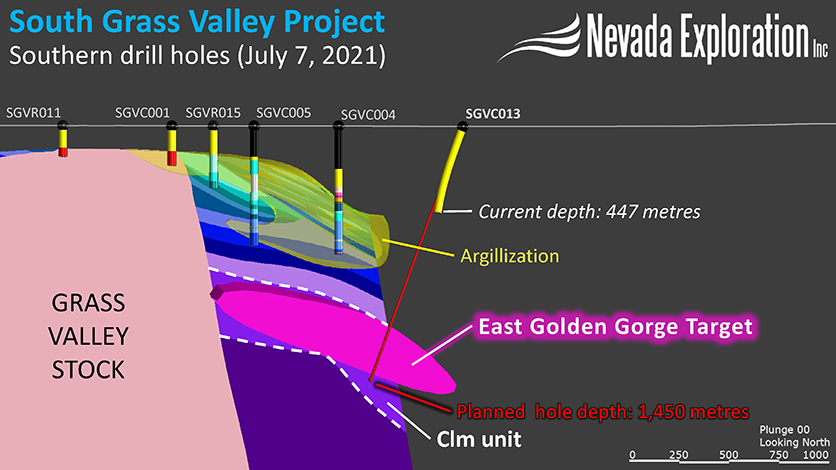 Drilling began at SGVC013 on May 27.  After reaching a depth of 447 metres, and approaching what appears to be the alluvium-bedrock contact, drilling was suspended by NGE’s drilling contractor due to availability of qualified personnel.  SGVC013 has been stabilized with PQ-sized core rods and appropriate drilling fluids, and the Company expects to continue the hole once its contractor has re-assembled the necessary personnel to achieve the deeper drilling depths required at South Grass Valley.

All other terms and conditions of the Warrants remain unchanged.

The Warrant extension is subject to acceptance by the TSX Venture Exchange.

With mature, exposed search spaces seeing falling discovery rates, NGE believes the future of exploration is under cover.  Nevada’s exposed terrains have produced more than 200 million ounces of gold, and experts agree there is likely another 200 million ounces waiting to be discovered in the half of Nevada where the bedrock is hidden beneath post-mineral cover.  NGE has spent more than 15 years developing and integrating new hydrogeochemistry (groundwater chemistry) and low-cost drilling technology to build an industry-leading, geochemistry-focused toolkit specifically to explore for new gold deposits under cover, and the Company is now advancing a portfolio of projects totalling more than 170 square kilometres.

Based on the results of its combined exploration datasets, NGE believes it has discovered a mineral system at South Grass Valley with the architecture and scale to potentially support multiple CTGDs.  As the Company continues to advance the project, per NI 43-101, 2.3(2), the Company must remind its stakeholders that the project remains an exploration target for which the potential quantity and grade of any mineral resource is still conceptual in nature, and that it is uncertain if further exploration will result in the target being delineated as a mineral resource.