Nevada Exploration Inc. (“NGE” or the “Company”) (TSX-V:NGE; OTCQB:NVDEF) is pleased to announce the launch of its interactive South Grass Valley 3D VRIFY model, and to provide the second monthly update from its 2021 core drilling program at the project.

The first hole of the program, SGVC012, is presently at a depth of approximately 1,300 metres within the Goodwin Formation of the lower plate.  Logging completed for the upper portion of the hole has confirmed the presence of Carlin-type alteration associated with highly-anomalous pathfinder geochemistry, as well as significant, regional-scale structural features along the projection of the Water Canyon Structural Corridor, as predicted by the Company’s geologic model.  At the current depth, core samples are showing evidence of increasing structural deformation and hydrothermal fluid flow, and the Company plans to continue to drill deeper while these features intensify.  For its next hole, SGVC013, NGE is planning to move southwards along the NNW-trending Water Canyon Structural Corridor, and extend its southernmost fence of drill holes another 600 metres towards the east.

To provide the context to explore the new information provided with its monthly updates, NGE welcomes its stakeholders to visit its new 3D South Grass Valley model, where the Company has published its geologic model and the results of each major work program to date using VRIFY Technology Inc.’s interactive VRIFY platform.  For a guided introduction to the model, the Company has also provided a short video highlighting the main datasets available to be reviewed. 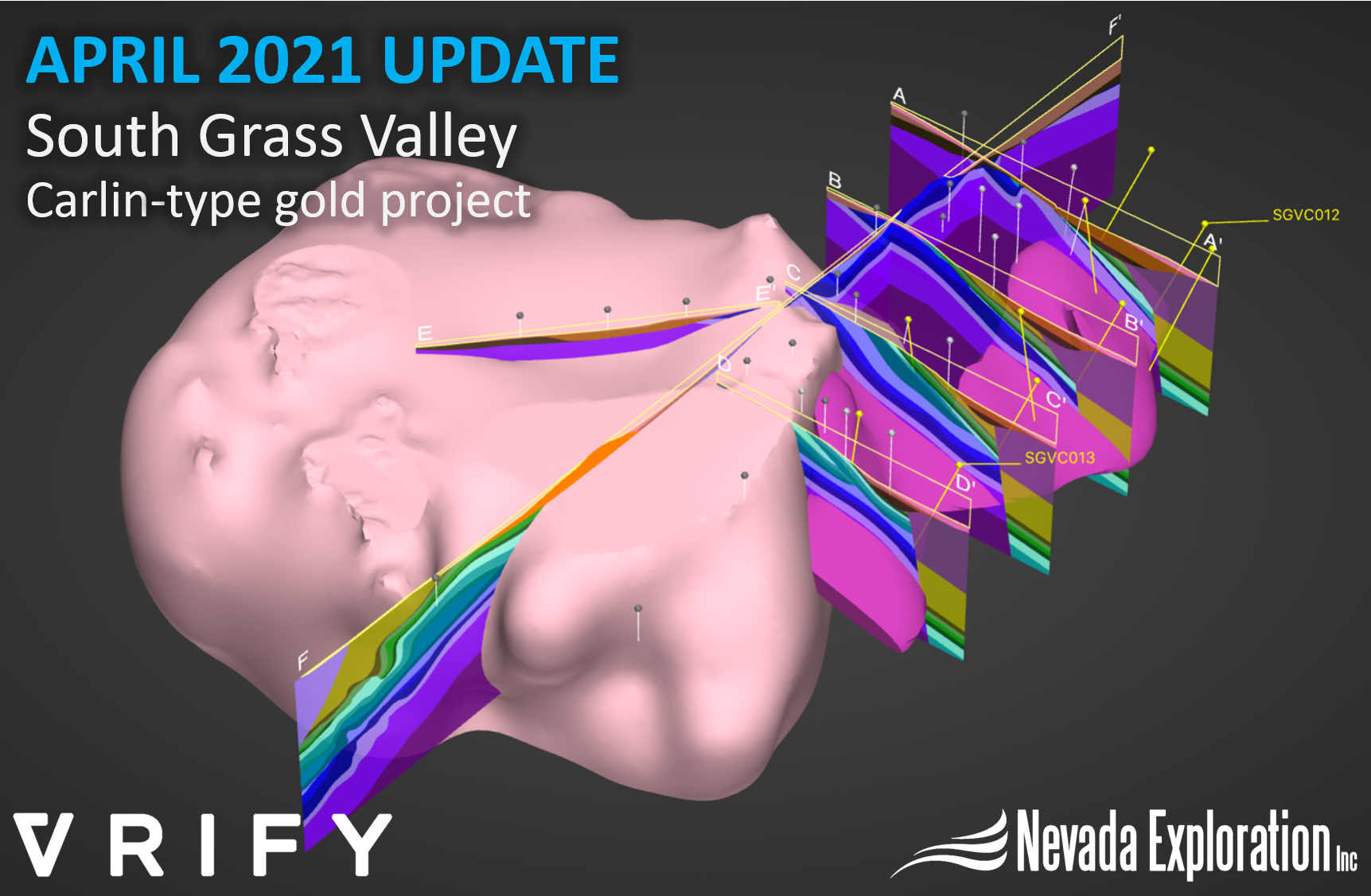 With respect to the current drilling, NGE reports:

NGE’s CEO Wade Hodges, discussing SGVC012 and plans for SGVC013: “It’s obviously early days for the program, and we still have more core to log from this current hole, though the first 950 metres we’ve logged has already confirmed the presence of widespread Carlin-type hydrothermal fluid flow, as well as highlighted both the scale and complexity of the structural features we’re seeing across the district, and in particular along our projected Water Canyon Structural Corridor.

“In our earlier drilling we began to see evidence that a block of the Roberts Mountains and Hanson Creek, which we call the “Wedge Block”, had been moved along a low-angle discontinuity we refer to as the “Hydra Fault”; and what we’re seeing in SGVC012, with more than 350 metres of missing stratigraphy between the Upper Hanson Creek and the Goodwin, is helping to solidify the presence of a major potential thrust fault across this northern end of the project.

“Once we drilled below this potential thrust feature, the next unit we encountered, the Goodwin, was tipped almost 90 degrees relative to what we saw to the west, indicative of significant folding and/or faulting between SGVC012 and our earlier holes, the axis of which appears to be parallel to our major NNW corridor.  As we’ve shared, the three major Carlin districts are all anchored by regional-scale structural features, which provided the fluid pathways to move massive volumes of mineralized hydrothermal fluids, and this large step-out to the east continues to present more evidence for just how big the scale of these structural and alteration features are at South Grass Valley.

“While it is significant to note the massive scale of these features, the change in bedding in the Goodwin does present a challenge in that we are now drilling parallel to the bedding, meaning we’re having to drill deeper than expected to reach our Cambrian-aged target stratigraphy below.  At the moment we’re seeing increasing post-soft sediment deformation and debris flow structural straining with normal-to-bedding calcite tension veinlets, together with fracture-controlled bleaching, and our plan is to continue the hole deeper; however, depending on what we see over the coming days with the XRF-derived geochemistry, we may make a decision to stop the hole, and instead use a subsequent drill hole in this area to test our target Clm stratigraphy closer to the center of the fold or fault feature – a setting we know hosts mineralization at the three major Carlin districts – where we also expect our target units to sit closer to surface.

“In the meantime, while we finish logging the bottom of SGVC012, when we’re ready to move sites, our plan is to drill our next hole, SGVC013, at the south end of the project, to extend our southernmost fence of drill holes deeper and closer to the Water Canyon structural corridor (see Section D -D’ in the VRIFY model: https://vrify.com/decks/10143-south-grass-valley-model-tour?slide=86386).  In terms of our speed of drilling, we’re seeing penetration rates averaging about 25 metres per day, which is slower than expected, though the daily averages have been increasing as the drillers become more familiar with the project, and we’re expecting this trend to continue with SGVC013.

“In summary, our early observations from SGVC012 are consistent with our projections of a major structural corridor cutting through our project area, hosting significant Carlin-type hydrothermal alteration features associated with highly-anomalous pathfinders – together all at a scale consistent with Nevada’s largest Carlin-type mineral systems, and we’re looking forward to finishing logging and sampling the SGVC012 core, and to moving on to add a similarly important new hole at the south end of the project.

”To follow our continued progress, we encourage all of our stakeholders to visit our new VRIFY model for the project, where you can review the results of each of our work programs, and our resulting geologic model – the same model we use daily to guide our current drilling.  By publishing all of this data online using VRIFY’s intuitive and interactive platform, we’re providing a powerful and transparent tool to explore how we’ve systematically advanced and de-risked this otherwise-covered project.  We hope you find it valuable.”

As the 2021 South Grass Valley drilling program continues, NGE encourages its stakeholders to sign up to its email list to receive its monthly updates, as well as to subscribe to one or more of its social media channels to follow along as its team shares photos from the field and its logging facility.

With mature, exposed search spaces seeing falling discovery rates, NGE believes the future of exploration is under cover.  Nevada’s exposed terrains have produced more than 200 million ounces of gold, and experts agree there is likely another 200 million ounces waiting to be discovered in the more than half of Nevada where the bedrock is hidden beneath post-mineral cover.  NGE has spent more than 15 years developing and integrating new hydrogeochemistry (groundwater chemistry) and low-cost drilling technology to build an industry-leading, geochemistry-focused toolkit specifically to explore for new gold deposits under cover, and the Company is now advancing a portfolio of projects totalling more than 170 square kilometres.

Based on the results of its combined exploration datasets, NGE believes it has discovered a mineral system at South Grass Valley with the architecture and scale to potentially support multiple CTGDs.  As the Company continues to advance the project, per NI 43-101, 2.3(2), the Company must remind its stakeholders that the project remains an exploration target for which the potential quantity and grade of any mineral resource is still conceptual in nature, and that it is uncertain if further exploration will result in the target being delineated as a mineral resource.