Nevada Exploration Inc. (“NGE” or the “Company”) (TSX-V: NGE; OTCQB: NVDEF) is pleased to present its next-stage plans to advance the East Golden Gorge target at its district-scale South Grass Valley Carlin-type gold project.  The target is defined by the intersection of a series of regional-scale, high-angle faults that the Company has named the Water Canyon structural corridor and a Cambrian-aged limey mudstone (the “Clm Unit”), which together the Company believes represent the dominant primary and secondary controls for the hydrothermal fluids responsible for the mineralization seen in its drilling to date.  To advance East Golden Gorge, NGE has designed a 12,500 metre, 10-hole core drilling program to test for potentially-economic mineralization along a 3,500-metre length of the target.

To share how NGE is narrowing its search for Carlin-type gold mineralization to East Golden Gorge, the Company has prepared a video that highlights the major geologic features at the project, explains why the results of its latest work have led NGE to East Golden Gorge, and lays out its next-stage plans to advance the project (24 minutes): https://rcl.ink/PB6.

The final summary from the full-length technical video is also available as an abbreviated video (4 minutes): https://rcl.ink/PBU.

Discussing the Company’s plans at East Golden Gorge, NGE’s President, James Buskard: “When we review the results of our two drilling programs as a whole, what we’re seeing at South Grass Valley is a typical Carlin-type geologic setting with characteristic alteration and anomalous geochemistry across several cubic kilometres of bedrock, which remains open.  By integrating the results of our drilling and mapping with the data from our geophysical surveys we believe we have established the primary source for the mineralized hydrothermal fluids responsible for these Carlin-type features, namely the Water Canyon structural corridor.  Based on the intensity and zonation of the alteration, gold, and pathfinder concentrations there is strong evidence that the secondary, lateral movement of the fluids through the district was stratigraphically-controlled within the Clm Unit.

“With a handle on what we think are both the primary and secondary controls for the mineralized hydrothermal fluid flow through the district, our focus has narrowed to where the Clm Unit dips closer to the Water Canyon structural corridor, representing the geologically-constrained target called East Golden Gorge.  To test East Golden Gorge for Carlin-type mineralization we’re proposing a program of carefully-targeted core holes to sample the full thickness of the Clm Unit along a three-and-a-half-kilometre length of the target. 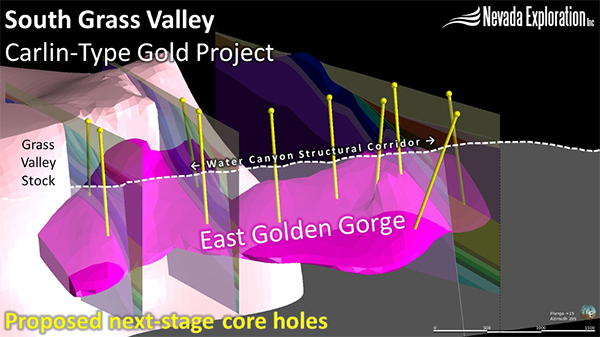 “As we plan this ambitious drilling program, we want to highlight what differentiates the target from other early-stage projects in Nevada.  Most significantly, compared to the size of the mineral systems hosting some of Nevada’s largest deposits at the north end of the valley, we believe the size of the target and scale of its associated alteration features support the potential to discover an entire new district.  Our next-stage program is designed to test for both a flat-lying geometry similar to that of Goldrush, in our case associated with stratigraphic-hosted mineralization within the Clm Unit, as well as more-vertical-hosted mineralization, similar to that at Cortez Hills, associated with the breccia features we’re seeing and the margins of the Grass Valley Stock.  To ensure the spacing of our proposed holes is suitable to test for this more-vertical type orientation, we’ve placed them an average of 600 metres apart along the length of the target.

“As we continue to advance and de-risk this district-scale target, we believe strongly that in today’s covered search spaces geology is what is drives discoveries.  From the beginning, we’ve taken a systematic approach to building the geologic framework we’re now using to target mineralization based on the latest research on the features and processes responsible for Nevada’s largest Carlin-type gold districts, as well as by integrating new exploration tools.  This is the exact geology-driven process being used by the world’s largest mining companies, and we believe based on our results to date, that we have the opportunity here at South Grass Valley to make a significant discovery, at a completely covered and otherwise blind project, that we discovered as a result of our industry-leading groundwater chemistry exploration program.”

As detailed in the technical video above and NGE’s news release dated May 27, 2020 (https://www.nevadaexploration.com/news/2020/nevada-exploration-presents-final-rc-drilling-results-from-south-grass-valley-carlin-type-gold-project), based on the results of its combined exploration datasets, the Company believes it has discovered a district-scale Carlin-type mineral system of a scale needed to host an entire new district, and is now focusing its exploration efforts at a specific target called East Golden Gorge.  As NGE continues to advance the Project, per NI 43-101, 2.3(2), the Company must remind its stakeholders that the Project remains an exploration target for which the potential quantity and grade of any mineral resource is still conceptual in nature, and that it is uncertain if further exploration will result in the target being delineated as a mineral resource.

The Company has spent 15 years developing and integrating new hydrogeochemistry (groundwater chemistry) and low-cost drilling technology to build an industry-leading, geochemistry-focused, under-cover toolkit specifically to explore for large new CTGDs in the more than half of Nevada where the bedrock is hidden beneath post-mineral cover.  Nevada’s exposed terrains have produced more than 200 Moz of gold, and experts agree there is likely another +200 Moz waiting to be discovered under cover in Nevada.