Nevada Exploration Inc. (“NGE” or the “Company”) (TSX-V: NGE; OTCQB: NVDEF) is pleased to announce that it has executed the definitive Exploration and Option to Enter Joint Venture Agreement (the “Agreement”) with Austin Gold Corp. (“Austin Gold”), led by former Pretium Resources Inc. CEO Joe Ovsenek, on its district-scale Kelly Creek Project (the “Project”) within the Kelly Creek Basin in north-central Nevada.  Under the Agreement, Austin has the right to earn a 51% interest in the joint venture by spending $5,000,000 over four years, of which $1,000,000 is a firm commitment, with the election to then earn an additional 19% by delivering a prefeasibility study.  Austin has also completed a $500,000 private placement into NGE.

Discussing the Project, Austin’s Executive Chairman, Joe Ovsenek: “Kelly Creek is one of only a handful of district-scale Carlin-type gold projects not currently controlled by the majors.   SSR Mining’s recent drilling success at nearby Trenton Canyon highlights the potential to discover new mineralization within the Battle Mountain Mining District, and is bringing new attention to the area.  Now that the definitive agreement is signed, we’re looking forward to working with Nevada Exploration to integrate their comprehensive exploration dataset with the latest research on the district, and we’re gearing up to get on the ground.”

Commenting on the Agreement, NGE’s President, James Buskard: “Kelly Creek is the first place we integrated our full suite of hydrogeochemistry exploration technologies to evaluate a highly-prospective, valley basin to search for new district-scale Carlin-type mineral systems.  As we’ve shared, we believe the combined results of our drilling, geophysics, and geochemistry programs have confirmed the presence and necessary scale of the critical components needed to host significant Carlin-type mineralization, and suggest that the gold-bearing mineral system at Kelly Creek is a likely northern, covered extension of the system responsible for mineralization at the nearby Marigold and Lone Tree deposits.  With our current focus on our flagship South Grass Valley Project, we’re pleased to partner with such an experienced and technically capable team to continue to advance Kelly Creek through the next stages of exploration.  This partnership gives our stakeholders the significant benefit of participating in multiple opportunities for discovery as both projects advance in parallel.” 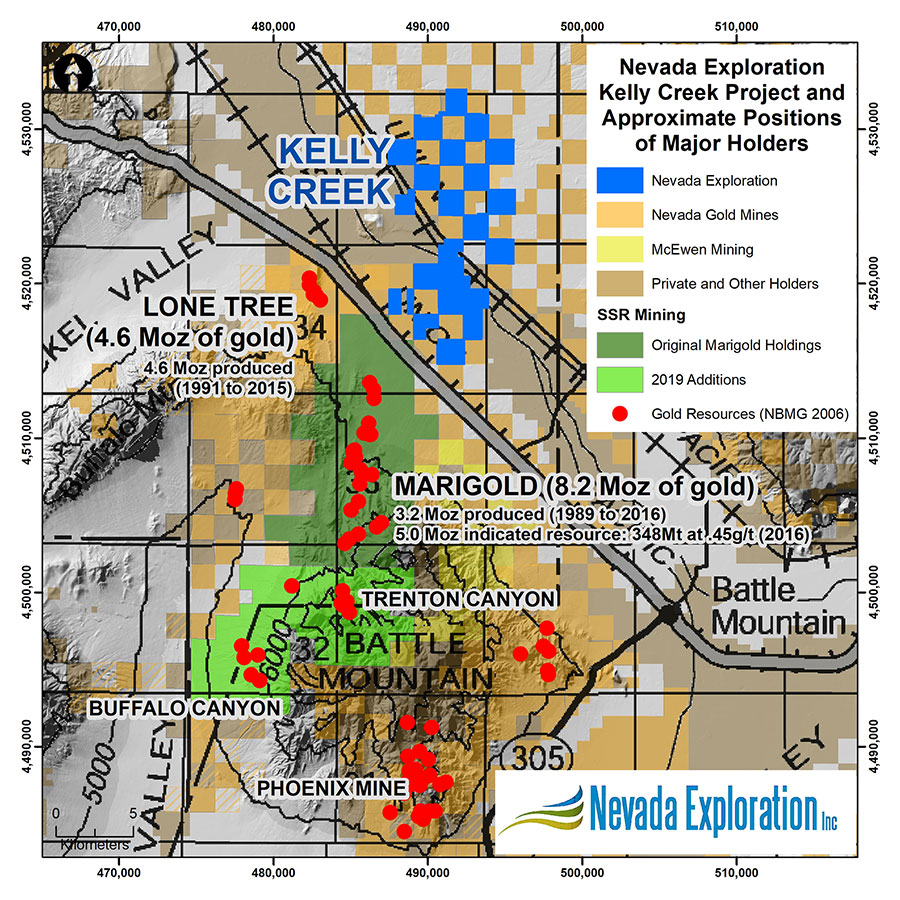 Under the Agreement, to earn a 51% joint venture interest in the Project, Austin Gold must spend $5,000,000 in exploration expenditures, as follows (the “Earn In”):

During the Earn In, Austin Gold will be the operator of the Project.

Upon completing the Earn In, Austin Gold has a one-time option to elect to earn an additional 19% interest in the joint venture, for a total of 70% (the “Additional Option”), by spending $1,500,000 per year during first three years of the Additional Option, and by delivering a prefeasibility study prior to June 1, 2028.

At NGE’s election, which must be made within 120 days of the approval by the joint venture of a feasibility study, Austin Gold will be obligated to provide NGE’s portion of any debt financing or arrange for third party financing of NGE’s portion of any debt financing required to construct a mine on the Project described in the feasibility study in consideration for the transfer by NGE to Austin Gold of a 5% interest in the joint venture.

Despite its proximity to significant mineralization, the interior of the Kelly Creek Basin has seen limited systematic exploration activity to date because its bedrock is largely covered by syn- to post-mineral volcanic units and post-mineral alluvium.  Recognizing the potential to find significant gold mineralization within the Kelly Creek Basin, dozens of major and junior explorers have spent tens of millions of dollars to follow the prospective geology seen in and proximal to the exposed bedrock in the surrounding mountain ranges beneath the sands and gravels covering the Basin.  Within the Project area, this activity has included: Santa Fe Pacific completing wide-spaced bedrock-mapping drilling in the 1990s; BHP completing an extensive soil auger geochemistry program through the late 1990s; and Placer Dome completing a reconnaissance-scale reverse circulation program in the early 2000s.  Other companies that either now hold or have held claims in the immediate area include Newmont, Barrick, AngloGold, Hemlo, Homestake, and Kennecott.  The efforts of each company have added valuable information about the geology of the Basin; however, without a cost-effective tool to conduct basin-scale exploration beneath the valley cover, the exploration programs to date in the Kelly Creek Basin have predominantly consisted of uncoordinated efforts focused on relatively small areas.

By integrating the use of its proprietary hydrogeochemistry technology with conventional exploration methods to evaluate the larger Kelly Creek Basin, NGE identified a highly prospective area in the middle of the basin along a portion of a structurally-controlled, shallow, covered, bedrock high coincident with highly anomalous gold and associated trace-element chemistry in groundwater.

In 2017, NGE completed a 61-hole, 5,864-metre shallow reverse-circulation drilling program at the Project using its Scorpion drill rig, to collect groundwater, alluvium, and top-of-bedrock geochemistry samples across a large area of the Project.  As NGE announced in January, 2018 (see news release: https://www.nevadaexploration.com/news/2018/nevada-exploration-enlarges-gold-mineralization-at-kelly-creek-and-prepares-for-deeper-drilling), NGE believes the results of the Scorpion drilling program confirmed that the hydrothermal system that was active at the Project is gold-bearing over larger areas than previously known, with discrete zones of enriched gold in groundwater anchored to at least two clusters of >0.1 g/t gold in bedrock covering areas consistent in size with the geochemical footprints of the nearest major gold deposits, Lone Tree (produced 4.60 Moz gold from 1991 to 2015) and Marigold (production from 1989 n- 2016: 3.24 Moz gold plus 2016 Indicated Mineral Resource of 4.98 Moz, with 348.30 Mt at 0.45 g/t).  When combined with the results of earlier drilling, NGE’s updated geologic model suggests that the gold-bearing hydrothermal system at Kelly Creek is likely the northern extension of the system responsible for Lone Tree and Marigold, and is of a size to support major additional mineralization.  As the Kelly Creek Project continues to advance, per NI 43-101, 2.3(2), at this stage of development: the Project is an exploration target for which the potential quantity and grade of any mineral resource is still conceptual in nature, there has yet to be sufficient exploration to define a mineral resource, and it is uncertain if further exploration will result in delineating a mineral resource.  Mineralization hosted on adjacent and/or nearby projects is not necessarily indicative of mineralization hosted on the Company’s property.

Austin Gold has subscribed for $500,000 in a private placement in NGE consisting of 2,500,000 units at a price of $0.20.  Each unit consists of one common share in the capital of the Company (a “Common Share”) and one-half of one Common Share purchase warrant (a “Warrant”), with each whole Warrant entitling the holder to acquire an additional Common Share at an exercise price of $0.50 per Common Share for 30 months.  If the closing price of the common shares of NGE quoted on the TSX Venture Exchange is greater than $0.90 for 10 consecutive trading days, NGE may accelerate the expiry date of the Warrants to the 30th day after the date on which NGE gives notice to the Warrant holders of such acceleration.  Proceeds from the private placement will be used for general working capital.  The securities issued at closing of the private placement will be subject to a four month plus one day hold period expiring November 8, 2020.

Austin is a privately-held, British Columbia incorporated exploration company led by Executive Chairman Joe Ovsenek, and is focused on gold exploration in Nevada.  Mr. Ovsenek is the former CEO of Pretium Resources Inc., where he led the advance of the high-grade gold Brucejack mine, which has been operating profitably since commercial start-up in 2017.

Two of Austin’s directors and officers are non arm’s length to NGE.  Austin’s President and Director, Dennis Higgs, is Chairman and Director of NGE, and an insider by virtue of his +10% shareholdings.  Austin’s Corporate Secretary and Director, Darcy Higgs, is an insider of NGE by virtue of his +10% shareholdings.  As a result of Dennis Higgs’s and Darcy Higgs’s relationships with NGE, both the earn-in and joint venture agreement and the private placement contemplated under the Agreement with Austin constitutes a related party transactions, though are exempt from the formal valuation and minority approval requirements of Multilateral Instrument 61-101 - Protection of Minority Security Holders in Special Transactions as NGE’s securities are not listed on any stock exchange identified in Section 5.5(b) thereof, and as the fair market value of the transactions does not exceed the 25% of NGE’s market capitalization threshold, as per Section 5.5(a) and Section 5.7(a) thereof.

The Company has spent 15 years developing and integrating new hydrogeochemistry (groundwater chemistry) and low-cost drilling technology to build an industry-leading, geochemistry-focused, under-cover toolkit specifically to explore for large new Carlin-type gold deposits (“CTGDs”) in the more than 50% of Nevada where the bedrock is hidden beneath post-mineral cover.  Nevada’s exposed terrains have produced more than 200 Moz of gold, and experts agree there is likely another +200 Moz waiting to be discovered under cover in Nevada.