Nevada Exploration Inc. (“NGE” or the “Company”) (TSX-V: NGE; OTCQB: NVDEF) is pleased to report the next round of results from its drilling program at its South Grass Valley Project (the “Project”), where the Company’s early, wide-spaced drill holes continue to intersect characteristic Carlin-type gold deposit (“CTGD”) geologic controls, together with anomalous and highly-anomalous CTGD pathfinder element concentrations over a target area at least 3,000 metres along strike.

Discussing the latest results, NGE’s CEO, Wade Hodges: “As we keep taking these large step outs, we’re seeing that this system is still open, really in all directions and at depth.  The last three holes all bottomed in increasing silicification, which we now know in SGVC006 and SGVC007 is associated with consistent runs of increasing gold concentrations.  With such a wide spread of drill holes across our target area, that together have tested a significant thickness of the regional stratigraphic sequence, we have the pieces to look closely at the different bedrock units, interpret the project geology, and focus on identifying the controls to vector towards potentially high-grade mineralization.  We are now busy using these latest assay results to update our exploration model and lay out a clear plan for the next phase of drilling.” 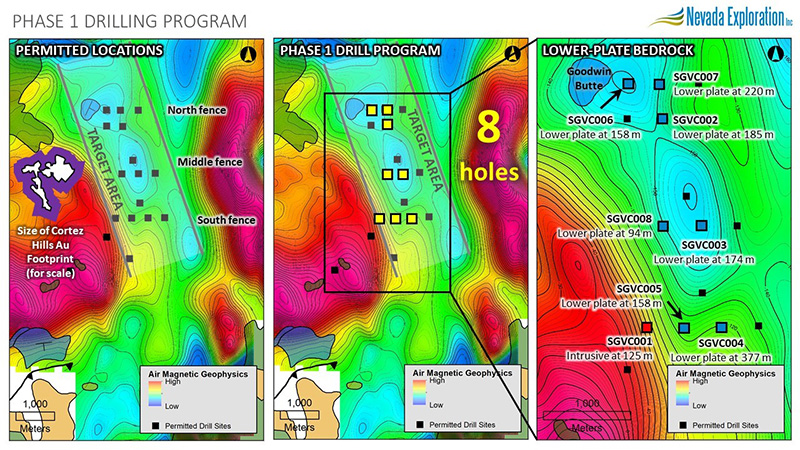 As described in the Company’s news release dated January 23, 2019, SGVC006 was located 600 metres northwest of SGVC002, and entered lower-plate limestone at 158 metres below the gravel, which continued along with alternating mudstone units to the bottom of the hole at 650 metres. The upper part of SGVC006 showed alteration features similar to the upper part of SGVC002, with decalcification, dissolution, and disruption textures. The bottom 230 metres of SGVC006 encountered black, carbonaceous, debris flows with significant diagenetic pyrite exhibiting intense silicification, brecciation, and high levels of secondary pyrite.

Following up on the favourable geologic units seen in SGVC006, SGVC007 was located 400 metres east of SGVC006, and entered lower-plate limestone at 220 metres below the gravel, which continued along with alternating mudstone units until the bottom of the hole at 589 metres.  These units represent largely the same stratigraphic units seen in SGVC006, though are relatively lower than in SGVC006.  SGVC007 bottomed in the upper portion of the same debris flow unit and showed the same increasing intensity of silicification but with elevated CTGD pathfinder elements encountered sooner within the zone of silicification than in SGVC006 suggesting SGVC007 might be closer to the primary fluid source for this area.

Reviewed together, the results from SGVC006 and SGVC007 show an upper mineralized zone that is about 250 metres thick, dominated by syn-cataclastic dissolution breccias, as well as a lower zone, 100 to 150 metres deeper, dominated by intense silicification that extends below the depths of the holes (both holes bottomed in this silicified material).  Reviewing the assay results, both the upper and lower zones contain anomalous and highly-anomalous CTGD pathfinder elements across significant intervals, though each zone contains marked differences in terms of their other trace element concentrations.  The silicification in the lower zones is associated with increasing geochemical level concentrations of silver, copper, zinc, and molybdenum (though all are still relatively low and consistent with CTGD alteration), which suggests the zones represent different parts of the same, larger system.

NGE has added the downhole strip logs for SGVC006 and SGVC007, with assays for gold and CTGD pathfinders, plus core photos, to the Project datafile available at:  http://www.nevadaexploration.com/news/nevada-exploration-reports-latest-drill-results-from-south-grass-valley-project-battle-mountain--eureka-trend-nevada.

From SGVC007, at the north end of the Project, NGE returned to the middle of the Project for SGVC008, 400 metres west of SGVC003.  SGVC008 was placed in the west central part of the property and drilled at an angle of -80° due west to support the collection of oriented core samples from an up dip (higher) sequence of the stratigraphic units seen across the Project.  The Company expected that the hole would provide a thicker section of potentially less-altered and structurally less-damaged stratigraphy to provide additional information about bedding and fault attitudes to improve the interpretation of the lithologic, structural, alteration, and mineralization features of the larger system.

As expected, SGVC008 encountered the same interbedded limestone and mudstone units as in SGVC003, though considerably higher, beginning at only 94 metres beneath the gravel cover, compared to 174 metres in SGVC003.  Importantly, the measurements from the oriented core have established predominant, moderate to steep bedding dips towards the NE, which is consistent with the regional NW trend of fold axes – the same orientation of fold axes that are also associated with the controls for mineralization at CTGDs in the region.   Unexpectedly, SGVC008 encountered syn-cataclastic dissolution alteration similar to SGVC003, and bottomed in increasing silicification similar to that encountered at the bottoms of SGVC002, SGVC006, and SGVC007.   Unfortunately, the drill hole entered a major fault within this zone of silicification that could not be drilled across.  The hole was terminated at 248 metres, before reaching its target depth of 600 metres.  The drill samples from SGVC008 have been submitted for assay.

Having now completed the first phase of drilling at the Project, the Company is incorporating the latest drilling results into the Project’s exploration model to establish the critical controls for CTGD mineralization and direct its efforts for the next round of drilling.  Once complete, the Company looks forward to providing its stakeholders with a more detailed update.