Nevada Exploration Inc. (“NGE” or the “Company”) (TSX-V: NGE; OTCQB: NVDEF) is pleased to provide guidance on the scope and objectives of its recently begun core drilling program at its South Grass Valley Project, and to announce that new geophysical datasets combined with early information from its drilling program have provided additional confirmation for the Company’s geologic model at the Project, including the presence of shallow, intensely-altered, “lower-plate”, carbonate bedrock.

NGE’s South Grass Valley Project is located approximately 50 kilometres south-southwest of Barrick Gold Corp.’s Cortez complex, within the specific region of north-central Nevada known for Carlin-type gold deposits (CTGDs).  NGE originally generated the Project based on elevated concentrations of gold and CTGD-style pathfinder elements in groundwater identified during a basin-scale hydrogeochemistry-supported exploration program.  The objective of NGE’s first round of core drilling at South Grass Valley is to confirm whether the enriched gold and CTGD-style pathfinder-element geochemistry in groundwater at the Project is associated with a hydrothermal system of a scale consistent with those responsible for Nevada’s large CTGDs, such as Cortez Hills at the north end of the valley.

One of the most significant challenges in exploring for gold in districts where bedrock is covered is vectoring towards mineralization before encountering a first significant gold intercept.  To confront this challenge, industry researchers have been focused on enlarging deposits’ footprints to make them easier to find, largely based on the understanding of the size and concentration of the pathfinder element and (most recently) isotopic halos seen in the bedrock surrounding deposits.  Based on recently-published, extensive research on the footprints of CTGDs, as described in NGE’s news release dated July 11, 2018, the pathfinder element and isotopic footprint that surrounds Cortez Hills extends more than 1,000 metres into the surrounding bedrock, compared to actual widths of economic mineralization that are in many places less than 300 metres wide.  More specifically, the deposit footprints at Cortez Hills and other large CTGDs in Nevada are defined by specific concentrations of pathfinders that each travel different distances beyond the deposit, which are generally found in the following order as they extend outwards from the economic ore zones: (nearest) Au < 13C & Tl < Sb < Hg < As < 18O (farthest).

This new research on the size and composition of the deposit footprints at Cortez Hills and other CTGDs in Nevada provides valuable information for establishing the appropriate drill hole spacing to systematically de-risk and advance a CTGD exploration project.  While the limits of economic mineralization at a deposit such as Cortez Hills may in places only measure 300 metres across (presenting an exceedingly small, and thus risky, target to hit with an early-stage, wide-spaced, drilling program), explorers can now respond to footprints that are greater than 1,000 metres across.  The effective result is that explorers can now meaningfully advance early-stage CTGD projects with fewer and more widely spaced drill holes to confirm the presence of a CTGD footprint, prior to committing to large and more detailed drilling programs.  Furthermore, the results of these studies also provide the necessary thresholds (benchmarks) needed to vector towards gold mineralization once inside the footprint.

Based on the results of this research, NGE has permitted three E-W fences of drill holes, spaced approximately 1,200 metres apart, across the exploration target at South Grass Valley, with permitted drill hole locations spaced approximately 400 metres apart along each fence.  For the first phase of drilling, NGE expects to drill up to two wide-spaced holes along each fence, for a total of up to 6 drill holes, with the specific objective of providing the appropriate coverage to test for the footprint of a large CTGD.  At this stage, NGE will be testing for thick intervals of hydrothermally-altered carbonate host rocks that contain significant concentrations of CTGD pathfinder elements in line with the thresholds that define the deposit footprints surrounding other large CTGDs.

If these first wide-spaced core holes do successfully discover a large CTGD footprint, NGE would expect the subsequent phase of drilling to then include the balance of the permitted drill holes, with the objective of using CTGD pathfinder elements to vector towards the centre of the potentially gold-bearing system.

To maximize the likelihood that the wide-spaced, early drill holes are positioned in locations that can test for (intersect) known controls for mineralization in CTGDs, namely suitable host rocks and structures (faults), NGE has added to and refined its geophysical datasets, which are important inputs to its exploration model.  To establish the locations of potentially important high-angle fault zones, NGE acquired additional gravity data during September and October, which included collecting 472 new in-fill gravity stations.  To delineate areas of the Project underlain by favourable carbonate host rocks (“lower-plate”), NGE contracted a Reno-based geophysicist to review the airborne magnetic dataset that NGE flew in early 2018.

The results of the new detailed gravity data have resolved what had previously been interpreted as a broader structural corridor into a more focused N-S fault zone, the location of which is also corroborated in offsets seen in the air magnetic data.  Additionally, the latest air magnetic interpretation continues to suggest a large area of carbonate host rocks across the Project punctuated by what are now interpreted as likely granitic intrusive units, which are often tracers of major structural corridors, and which provide additional evidence for the projected N-S fault zone seen in the gravity.

NGE began drilling on September 29, 2018, at drill site SGV001, located towards the west end of the southern fence of permitted drill sites, above what was interpreted to be the up-dip edge of the lower-plate units beneath relatively shallower cover.  The rationale for selecting an initial drill site with shallow cover was to minimize the potential complications of drilling through the cover material in order to complete as deep a hole as possible to provide important stratigraphic information early in the drill program; however, choosing an up-dip location also presented the risk of being closer to the granitic intrusive units interpreted in the air magnetics.  While granitic intrusives are commonly found along structural corridors associated with CTGDs, they themselves are generally unreactive and poor host rocks for alteration zoning and gold mineralization.  Drill hole SGV001 encountered bedrock at 125 metres, which turned out to be a granitic intrusive unit, and NGE stopped the drill hole at 196 metres.  The bedrock at SGV001 does show evidence of hydrothermal activity, and NGE expects to return to complete an additional hole at the eastern end of the southern fence, further from the projected extent of the granitic intrusive units based on the air magnetics, with the goal again of encountering and sampling a thick section of lower-plate carbonates.

After SGV001, NGE moved the drill rig to the northern fence, to drill site SGV002, which is located approximately 1,000 metres to the east of Goodwin Butte, along the focused N-S fault zone defined in the most recent gravity geophysics.  The rational for choosing this location was to complete a deep drill hole into what was interpreted to be: (a) shallow lower-plate carbonates; (b) coincident with a projected structural corridor; and (c) near the already known enriched CTGD pathfinder elements seen in outcrop at Goodwin Butte.  SGV002 encountered bedrock at 185 metres.  Beginning from the top of bedrock downwards, SGV002 has penetrated what appears to be a high-angle fault zone within lower-plate carbonates that early logging suggests has been associated with several periods of intense hydrothermal activity.  Drilling at SGV002 continues. 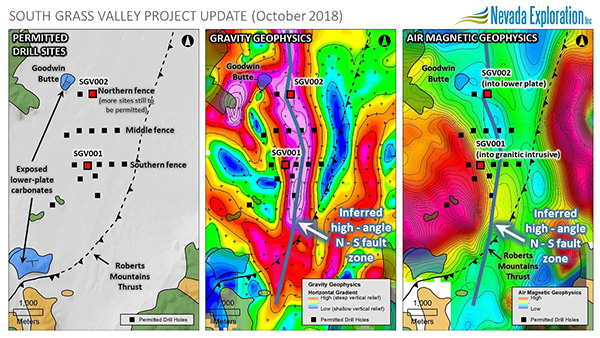 Discussing the ongoing drilling at South Grass Valley, NGE’s CEO, Wade Hodges: “We’re happy to report that drilling is going smoothly at the Project.  Obviously, we had hoped that SGV001 would have gone directly into the lower plate, but we’ll head back to the southern fence and complete another hole further to the east later in the program.  In the meantime, at the north end, SGV002 is going very well.  Right from the top of bedrock at SGV002, it looks like we’re into a major fault zone cutting through lower-plate carbonates that have experienced considerable hydrothermal activity, clearly marked within at least a 200-metre interval exhibiting decalcification, clay, multiple sequences of calcite veining and brecciation, and silicification, as well as intense oxidation.  These geologic markers and their intensity over such a thick interval are consistent with those that characterize the hydrothermal systems associated with large CTGDs, and these samples now provide a thick sequence of bedrock to test for the pathfinders that define CTGD footprints.  It’s also great to see that the projected intersection at SGV002 of shallow favourable carbonates and the N-S structural corridor has been confirmed as it builds additional confidence in our geophysical interpretations across the rest of the Project.

“We know that CTGDs are the product of specific and characteristic critical geologic components, namely favourable: structures, host rocks, zones of permeability, alteration, and geochemistry.  If there is a large CTGD at South Grass Valley, we would expect to see multiple, independent lines of evidence for the presence of these critical components.  If we’re as close as we think we could be with our target at South Grass Valley, the surrounding country rocks should also contain the right types of rocks and alteration, which they do; likewise, if there is indeed the required major structural zone to have sourced mineralized hydrothermal fluids, we should see a suggestion of it in the geophysics, which we do; and now that we’re drilling, if our projections of favourable host rocks and structures are correct, we should see thick intervals of altered lower-plate carbonates, which we now have.  The next box we need to check is whether this system contains suitably enriched concentrations of pathfinder elements consistent with a large CTGD.  In summary, we’re very pleased with the results we’re seeing; we’re drilling into the types of rocks we had hoped to encounter; we’re getting important information to continue to refine our exploration model; we’re looking forward to being able to review the pathfinder element concentrations when assays become available; and we’re certainly excited to keep drilling.”

NGE is pleased to welcome its stakeholders to visit with its team at the following upcoming events: