Nevada Exploration Inc. (“NGE” or the “Company”) (TSX-V:NGE; OTCQB:NVDEF) is very pleased to report that the assay results from hole SGVC004 of its ongoing core drilling program at its South Grass Valley Project have extended the thick (> 200 metre) intervals of enriched Carlin-type gold deposit (CTGD) pathfinder elements previously announced in holes SGVC002 and SGVC003 a further 1,200 metres to the south.  With these three holes, spaced a total of 2,500 metres along the interpreted strike of the NNW-SSE target, all intersecting favourable “lower-plate” carbonate host rocks exhibiting intense hydrothermal-alteration and containing significant concentrations of CTGD pathfinder elements, including gold, NGE believes these results further confirm the presence of a district-scale Carlin-style hydrothermal system at the Project.

With the positive results from these first drill holes, NGE is now offsetting the holes with the objective of establishing the controls of and vectoring towards potential higher-grade gold mineralization.

Discussing the results, NGE’s CEO, Wade Hodges: “As we shared in our last news release, we knew visually that the lower-plate bedrock in SGVC004 contained a similarly thick interval of CTGD-style alteration to those seen in holes SGVC002 and SGVC003, and now with the assays back for SGVC004, we can confirm that the associated CTGD pathfinder elements are there as well, including increasing concentrations of gold.  Seeing such robust intervals of anomalous and highly-anomalous concentrations of CTGD pathfinder elements over such a large area further confirms we’re into what could be the peripheral parts of a potentially significant, mineralized CTGD-style hydrothermal system.

“Having established what we believe is a strike length of at least 2,500 metres, with holes on each of our three fences, we’ve begun our next phase of drilling, which is stepping out along the fences to define its lateral extent.  In the last few days we finished drilling SGVC005, located 400 metres to the west of SGVC004, and have now collared SGVC006, located 600 metres northwest of SGVC002.” 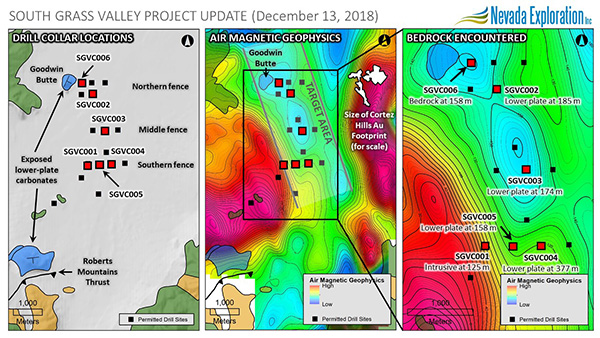 For discussion on the results of holes SGVC001, SGVC002, and SGVC003, including a video, please refer to the Company’s news release dated November 26, 2018: https://www.nevadaexploration.com/news/2018/nevada-exploration-discovers-large-carlin-style-hydrothermal-system-and-stakes-additional-claims-at-south-grass-valley-battle-mountain-eureka-trend-nevada

Located towards the eastern end of the southern fence, 1,168 metres south of SGVC003, SGVC004 entered bedrock at 377 metres from surface, about 200 metres deeper than seen in SGVC002 and SGVC003, in what NGE believes is the down-dropped, eastern side of a major N-S high-angle fault zone that runs parallel to the target area.  Just as in SGVC002 and SGVC003, SGVC004 encountered favourable lower-plate limestone from the top of bedrock to the bottom of the hole at 640 metres.

Hole SGVC004 is oxidized over a similar interval as holes SGVC002 and SGVC003, though at slightly deeper depths, from 417 metres to 640 metres, suggesting post-mineral fault movement.  Additionally, SGVC004 provides continuing evidence for multiple periods of intense high-angle and low-angle zones of structural disruption consistent with the complex structural setting already interpreted based on detailed gravity and airborne magnetic geophysics, which bodes well for the presence of numerous structurally-controlled fluid pathways and depositional traps.

Compared to SGVC002 and SGVC003, SGVC004 encountered more consistent and higher gold values.  Based on grade-thickness calculations for standardized, 245-metre-thick intervals centered on the mineralized zones in the three holes, SGVC004 returned more than twice the gold budget, indicating that at this southern fence, hole SGVC004 could be closer to the mineralized controls of the system at the southern end of the target area.  In all, the variability in the gold and CTGD pathfinder elements distributions provide a systematic basis for vectoring towards potential higher-grade gold mineralization with the next phase of drilling.

NGE has added the downhole strip log for SGVC004, with assays for gold and CTGD pathfinders, plus core photos, to the Project datafile available at: https://www.nevadaexploration.com/_resources/December_2018_South_Grass_Valley_Data_Package.pdf.  For context, the results are presented along with the “Anomalous” (lower/farther) and “Highly Anomalous” (upper/closer) exploration thresholds established through research lead by the Mineral Deposit Research Unit (MDRU) at UBC, as published most recently in Herron (2018), based on thousands of samples from large CTGDs in Nevada to define the extent of the pathfinder element footprints (halos) in the bedrock surrounding these deposits.

NGE located SGVC005 between SGVC001 and SGVC004, to test for increasing concentrations of gold and CTGD-style pathfinder elements in the up-dip side of the favourable limestone stratigraphy seen in SGVC004.  SGVC005 entered bedrock at 158 metres, more than 200 metres higher than in SGVC004, which represents a significant vertical offset over a relatively short distance, further highlighting the structural complexity of the target area.

In terms of stratigraphy, the major units encountered in SGVC005 included: (1) a fossiliferous limestone crackle breccia – a distinctive breccia unit consisting of angular to sub-rounded clasts of black carbonaceous siltstone, limestone showing bleached selvages, and other yet-to-be-identified rock types not seen in outcrop or drilling to date, supported by a black, non-calcareous matrix with secondary pyrite; (2) an unaltered volcanic dike; and (3) at the bottom, a unit of light to dark limestone with alternating beds of phosphate-enriched, carbonaceous siltstone with diagentic pyrite, which is thought to be correlative with slope debris flows encountered in the bottoms of SGVC002, SGVC003, and SGVC004.  Based on initial logging, SGVC005 shows similar structural and alteration textures as seen in previous holes, with oxidation to a similar depth; and in general, the porosity, alternating rheologies, and structural complexity seen in SGVC005 represent characteristic features of CTGD host units.

While the rock types encountered in SGVC005 are similar to those encountered in previous holes, the similarities are still not clear enough to provide traceable lithologic correlations between holes required for a more detailed structural interpretation of the project area.  Detailed logging and interpretation for SGVC005 will have to wait until assays are available, though at this stage and scale of exploration, NGE considers such structural complexity to be good for the deposition of gold.

NGE located SGVC006 600 metres northwest of SGVC002 and 200 metres east of Goodwin Butte to test for increasing concentrations of gold and CTGD-style pathfinder elements towards the west of SGVC002, as well as to test an inferred structure to the east of Goodwin Butte for a potential control for mineralization at the north end of the target.  SGVC006 has encountered bedrock at 158 metres.

As NGE continues drilling at South Grass Valley, per NI 43-101, 2.3(2), the Company must remind its stakeholders that the Project remains an exploration target for which the potential quantity and grade of any mineral resource is still conceptual in nature.  There has been insufficient exploration to define a mineral resource, and it is uncertain if further exploration will result in the target being delineated as a mineral resource.

NGE is pleased to welcome its stakeholders to visit with its team at the following upcoming events: