Exploration is a numbers game.  Regardless of the quality of the targets generated from regional-scale exploration programs, the high cost of conventional drilling has precluded the wide-spread use of drilling as a follow-up prospecting tool to evaluate meaningful numbers of targets.  Drilling is by far the highest input cost at a project, while also providing information about the smallest area.  To lower the risks and improve the odds of exploring in covered terranes, explorers need tools to lower the cost of evaluating prospective covered targets before transitioning to conventional drilling.

Tackling this challenge, industry front-runners are embracing new low-cost drilling platforms, most notably Rapid Air Blast (“RAB”) drilling, to complete “quick and dirty” drill holes to collect early-stage drill samples.  By radically lowering the cost of collecting subsurface data, these new platforms are allowing explorers to drill more holes into more areas to map and constrain covered targets based on direct observations of geology and geochemistry, and thus be far more focused in the application of more expensive, conventional drilling where warranted.

While RAB drilling is enjoying widespread adoption in many parts of the world, the depth of overburden cover in Nevada’s basins presents unique drilling challenges that make RAB drilling unsuitable.  Nevada Exploration has worked with industry experts to build its Scorpion drill rig, a truck-mounted, small-diameter reverse-circulation drill rig, specifically designed to tackle the deeper and water-saturated overburden conditions in Nevada.  Nevada Exploration uses its Scorpion drill rig to collect early-stage, low-cost geochemistry data at its covered projects, sampling all of groundwater, alluvium, and bedrock down to depths of up to 150 metres. 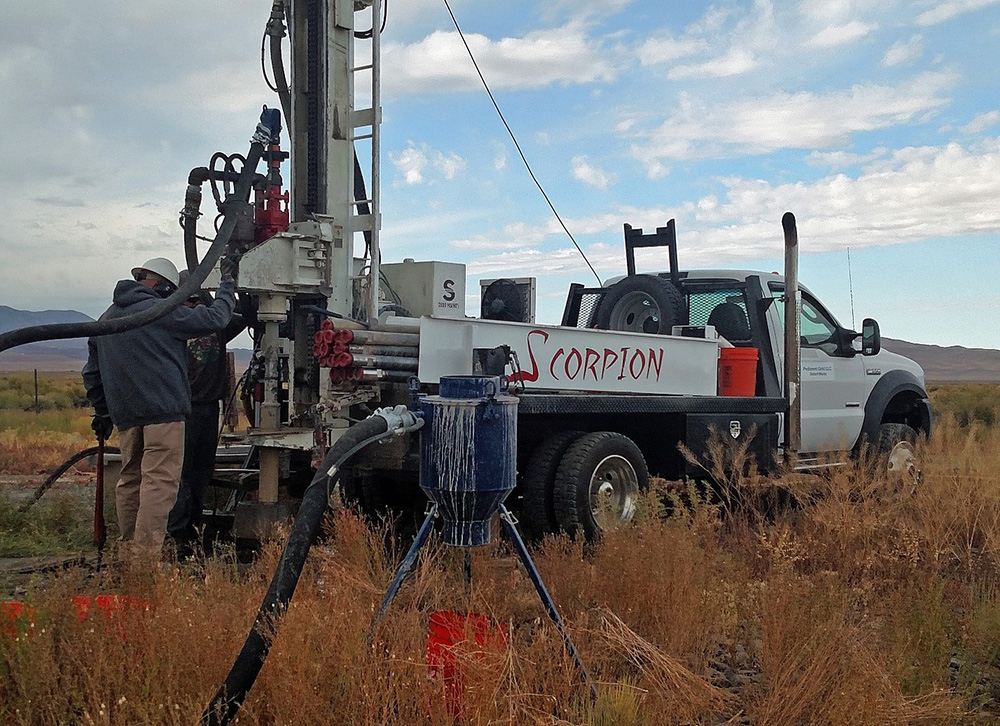 With its Scorpion drill rig, Nevada Exploration has established a cost-effective workflow to advance targets in covered settings by significantly reducing the costs of collecting subsurface samples.  The Company is improving the odds of success by being able to drill more holes and follow direct observations about geology and geochemistry.  Today, the Company is using its Scorpion drill rig at its portfolio of new exploration targets identified as part of its generative hydrogeochemistry exploration program focused on north-central Nevada.